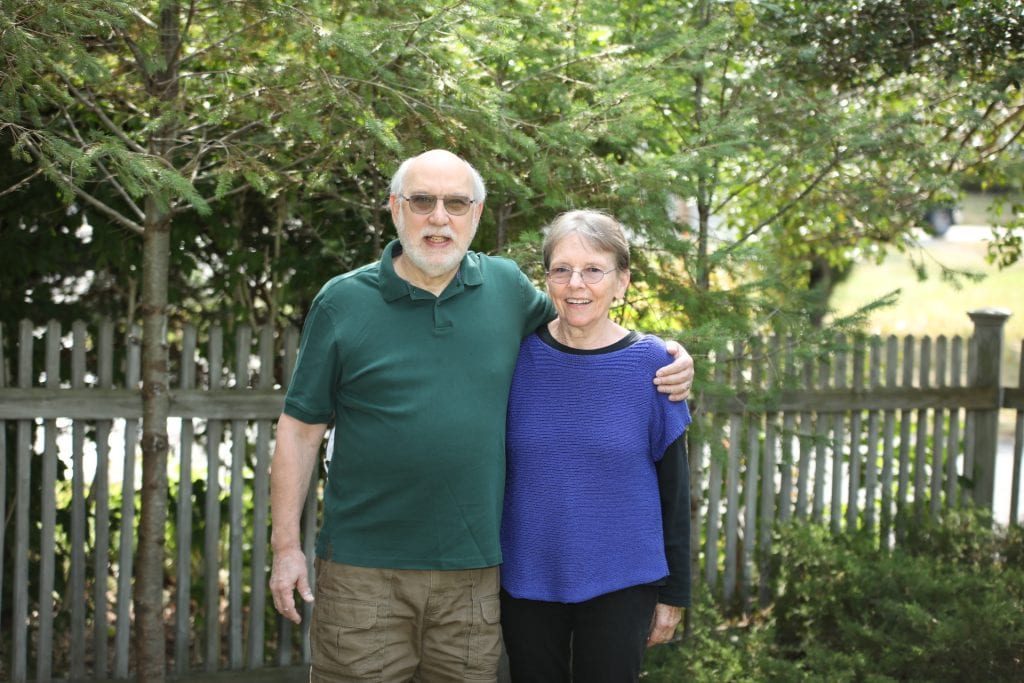 John and Margaret tell their story of how ordinary Hingham folks can do their part to reduce the impact of climate change.

We started composting kitchen scraps and yard waste around 2010 in a 3-bay composting bin I built out of lumber I salvaged from renovating our front stairway. This eliminated disposal at the Transfer Station of all our food garbage (which, buried underground in large quantities, can emit climate-damaging methane gas via vents as it anaerobically decomposes). Gone were the endless trips with a trailer filled with raked leaves and yard trimmings. Composting is easy, natural and convenient and produces a reliable stream of “black gold” - rich soil - to nourish our landscape. The beneficent little aerobic microbes that do all the work do not produce methane. But we didn’t know this then, we weren’t thinking of climate change; composting just made so much sense on many different levels. I’ve since encountered this time and again: following your instincts for ecologically responsible living pays unanticipated dividends and is invariably the best, and greenest, choice.

In November 2016, America suffered a grievous, self-inflicted wound, which presaged total repudiation of the federal government’s responsibility to safeguard the environment, withdrawal from the Paris climate accords and shameful abdication of our rightful leadership role in the global fight against climate change. My wife and I agreed then that it was up to individuals to take action and vowed to drastically reduce our carbon footprint. After consultation with Boston Solar and a few financial adjustments, our 7.27 kW solar array went live in October 2017. It’s guaranteed for 25 years, will likely last longer, will pay for itself by mid-2023 and will continue to generate clean energy and savings long after we have passed this house on to our son. We generate abundant renewable energy and what we can’t use goes back into the grid for our neighbors to use.

In 2018, we replaced an ancient steam heating system and window air conditioners in our 1880 house with energy- efficient electric air-source heat pump heating and cooling, despite blatant misrepresentation of the technology from two prominent local HVAC contractors. Our “mini-split” system was by far the least expensive, least intrusive, most flexible and greenest solution available. We have room-specific, push-button, programmable climate control while reducing natural gas usage by 98%, total energy consumption by 60% and CO2 emissions by 50%, with near-flat operating costs. No wonder "This Old House" raves about it.

Around this time, we felt the aging process accelerating. After viewing Dr. Michael Greger’s presentation on PBS, we abandoned animal products and adopted a whole food, plant-based diet. We saved money and the changes in health status, energy levels, mood and productivity were dramatic. Plus, we were no longer complicit in agribusiness’s vast environmental degradation, methane climate pollution and tortuous mistreatment of billions of animals in huge factory farms. Recently, we have cringed at the cruelty of people being forced to risk their lives at meatpacking plants to package meat for other people who have the luxury of quarantining from COVID19. Our hearts ache for the children who protested their parents’ plight outside these plants; our only consolation is that we are not subsidizing these injustices with our food dollars. 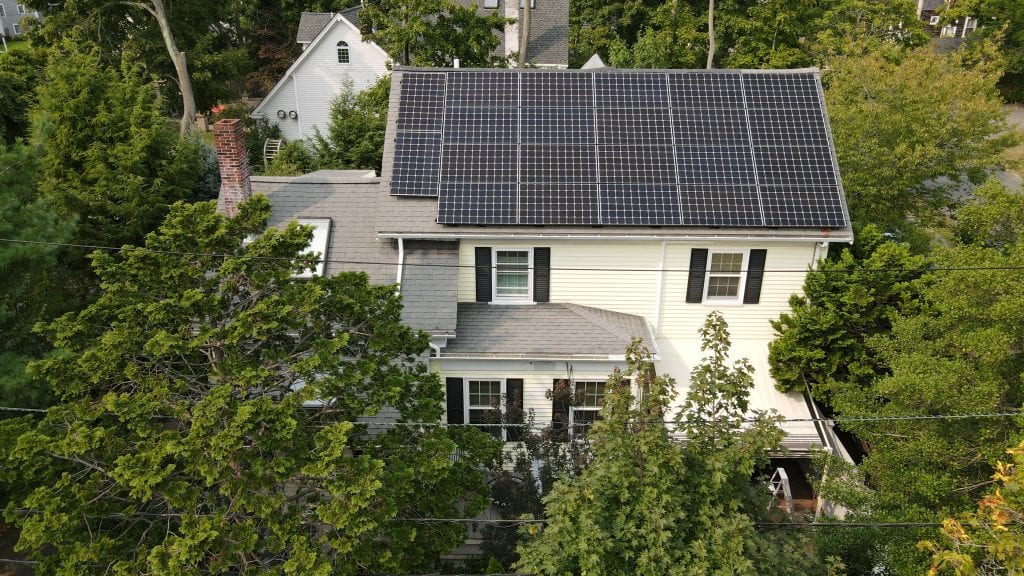 In 2019, I read a book which transformed my awareness of climate change: The Uninhabitable Earth, by David Wallace-Wells.

The author described in harrowing detail the horrific scope of human suffering that is coming during this century if we do not reverse course, achieve net zero emissions by 2050 and limit temperature rise from pre-industrial times to 1.5 degrees Celsius by 2100.

Our current trajectory will lead to an average global temperature increase of 4-plus degrees and possibly much higher. Human beings will literally steam to death in India and Asia and roast to death in drier climes like Australia and the American Southwest. (As I write this, it is 121 degrees in LA County.) Vast swaths of the planet will literally become uninhabitable. The Syrian drought and political upheaval produced 5.6 million refugees, with dramatic destabilizing effects on Europe and elsewhere. Unless we act now, it is estimated that there will be as many as two hundred million climate refugees.

Pandemic diseases, weather catastrophes, sea level rise, tribal/sectarian/political mayhem, food and water shortages – all caused or greatly magnified by climate change – will slaughter or immiserate many hundreds of millions in an ongoing Malthusian nightmare. But the fact that really rocked me was that fully half of all the carbon in the atmosphere today has been put there since the 1989 debut of the Seinfeld Show. CO2 doubled during the latter part of my adult life. It happened on our watch! I was and am personally responsible.

It seems that almost every day we encounter contemporaries delighting in their grandchildren. We share their joy; we ourselves may one day be similarly blessed. A child born today will reach 80 years of age in the year 2100. In what kind of world will their lives and those of their children unfold? What kinds of Sophie’s Choices will they be forced to agonize over? Who will be allowed into the shrinking life- boat of the rapidly diminishing temperate zones, who will be abandoned to perish? Greta Thunberg’s anguished outrage at her stolen innocence and the world’s business- as-usual insouciance as it grinds on toward climate catastrophe is heartbreaking - and utterly justified. Her cris de coeur should penetrate to the very core of our being. There is no precedent in human history for the scope of the unspeakable human suffering that currently forecasted climate change will inflict. Never before has one cohort of human beings perpetrated such vast death and suffering upon coming generations. It is this awareness that drives me.

Climate change is by far the single greatest moral and ethical issue of our time. If you are religious, if you claim to live by any ethical code at all, you cannot allow yourself to succumb to the discouragement and hopelessness that from time to time can afflict us all, or worse, to the faux worldliness of a detached, cynical fatalism. We must summon all our moral courage and devote ourselves to changing the current trajectory. We must do it now. We must not turn away.

Our climate story is simple:  we try to live our values. In the spring of 2019, I became part of Hingham Net Zero (HNZ), a vibrant local grass roots organization dedicated to fighting climate change right here, where we live. In my work with HNZ, I have developed two presentations based on my personal experience with residential solar and air source heat pump technology. These presentations are out on our web site, https://www.hinghamnetzero.org/. In them, I share what I discovered to be exhilarating news – going green efficiently generates clean, renewable energy and saves significant money! It’s simultaneously an ethical winner and a financial no-brainer! Those who pit being climate-responsible against prosperity are posing a false choice. They are trying to persuade us to both abdicate our moral responsibility and leave money on the table. Go to the web site and find out for yourself. Or talk to an HNZ “climate coach”. As Kermit the Frog said, it’s not always easy to be green! So get help. That’s why we’re here. It’s free, no obligation. Time is short; there is so much to do. Alone, we are weak; together, we can have a big impact. Don’t deny yourself the satisfaction and dignity of doing the most important work on the planet. Please join us.