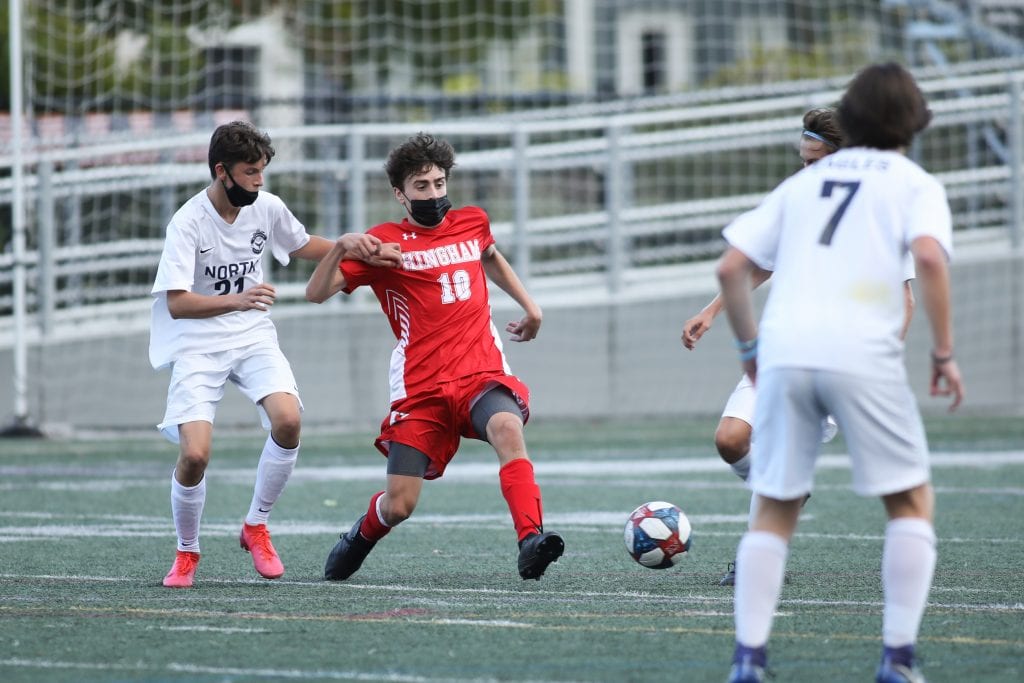 Junior Brian Dalimonte fights off defenders as the Harbormen hold on to win 3-2.

After a disappointing 1-0 loss to Marshfield to open their season last week, the boys soccer team bounced back with a 3-2 win over Plymouth North at home on Tuesday afternoon.  The Harbormen's first goal came from Senior Andrew Teague in the first quarter. That was followed up in the second quarter by a goal from Senior Paul Forbes who beat North's goalkeeper to the ball and chipped it over his head to give Hingham a 2-1 lead.  In the third quarter, Sophomore Cole Sampson beat multiple defenders, shooting with his opposite foot, and putting it in the net, making it 3-1 Hingham.  Minutes later, Plymouth North answered with a goal of its own.  The Harbormen played great defense for the rest of the game securing their first win of the season.

"I was pleased with today's game. We won." says Head Coach Ken Carlin.  "We are finally getting to a point where we are starting to score some goals.  It's because nobody has played anything since last year.  We have good skills, but we are just getting the tactical part down now."

A combination of the layoff and new rules could make for a choppy game, but Coach Carlin is encouraged by his teams efforts.

The Harbormen's next game is Thursday at Whitman-Hanson. 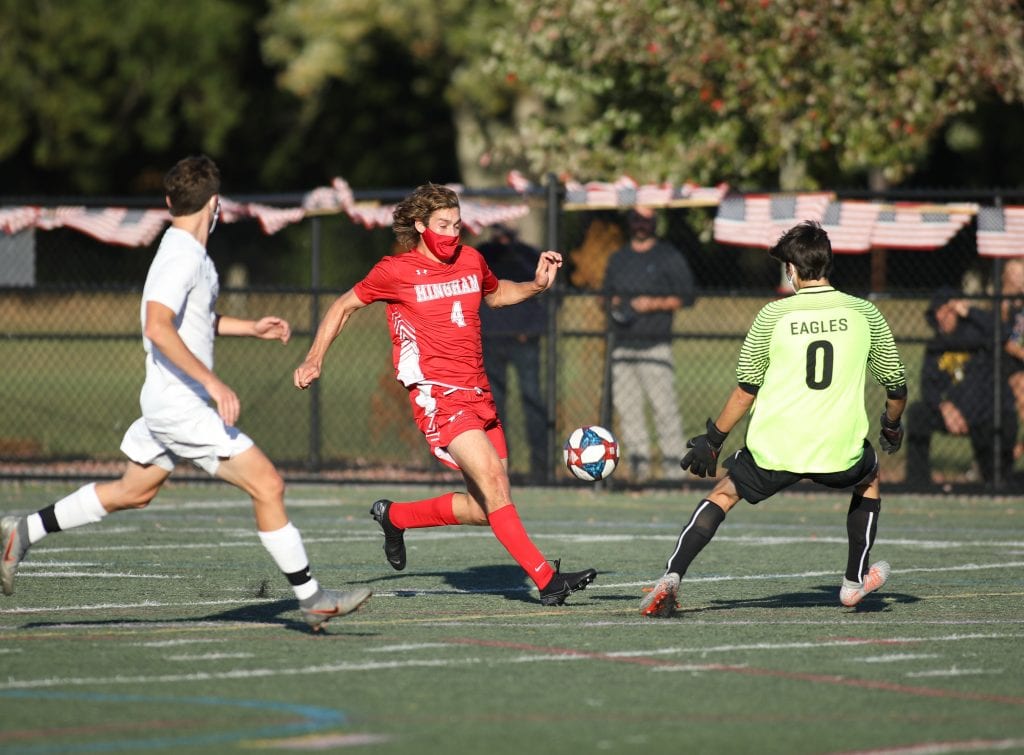 Senior Paul Forbes beats the goalie to the ball then chips it over his head for a goal. 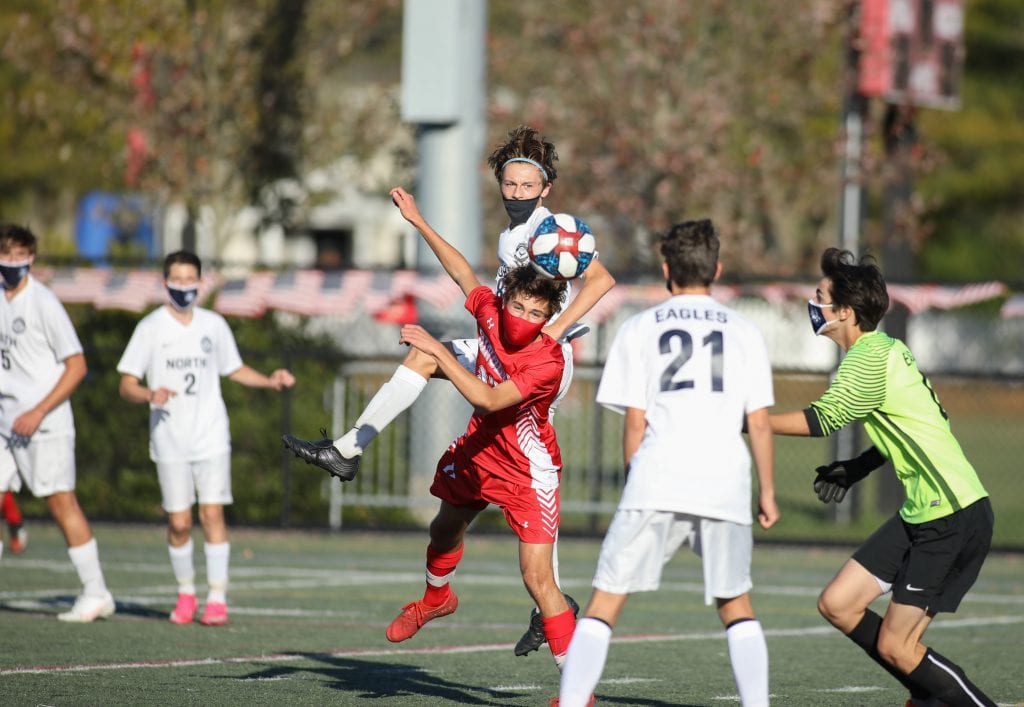 Junior Will O'Connor inadvertently heads the ball, which is not allowed because of COVID modifications. This results in an indirect kick for the opponent. 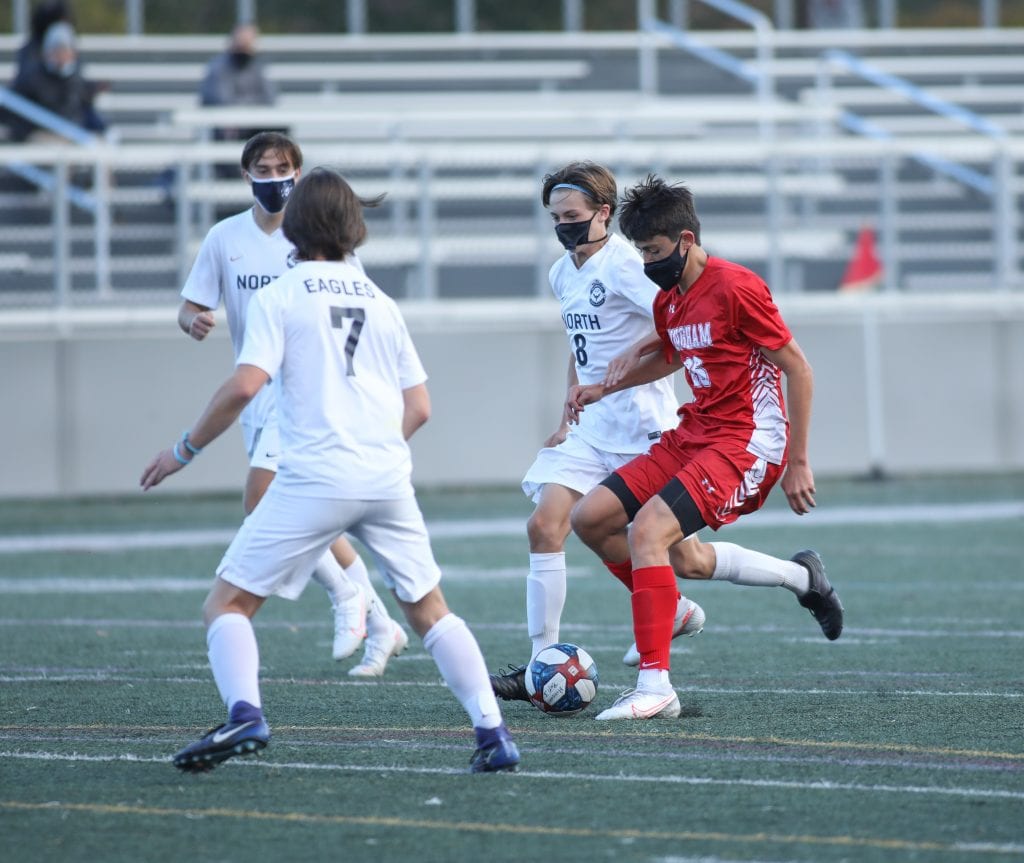 Sophomore Cole Sampson dribbling between multiple defenders before scoring in the 3rd quarter. 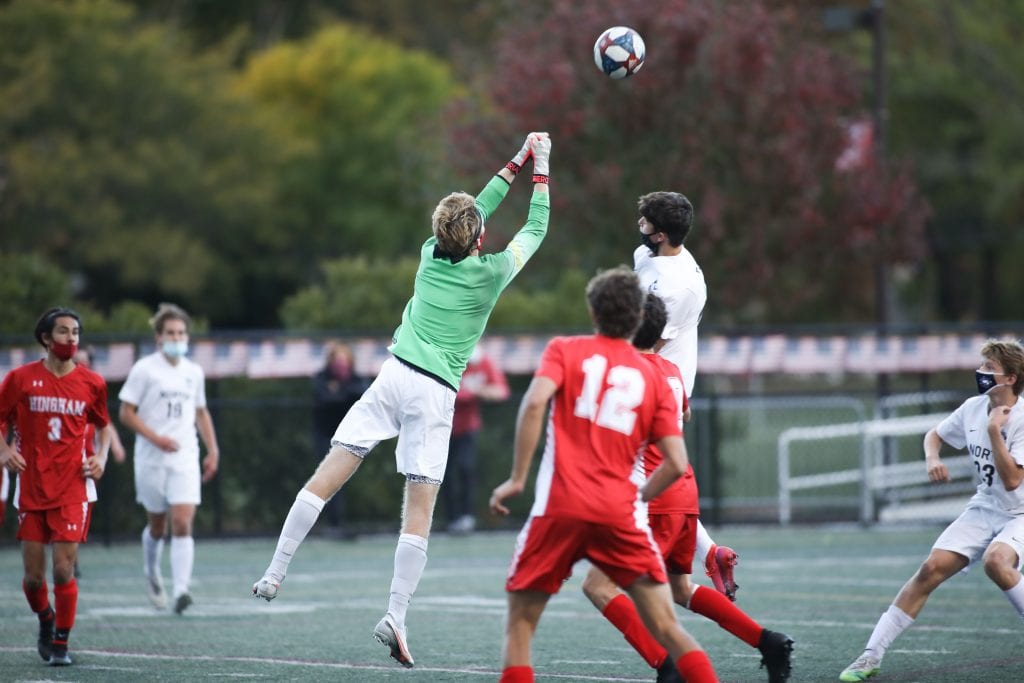 Senior Captain Trent Hesselman punches the ball away late in the game. 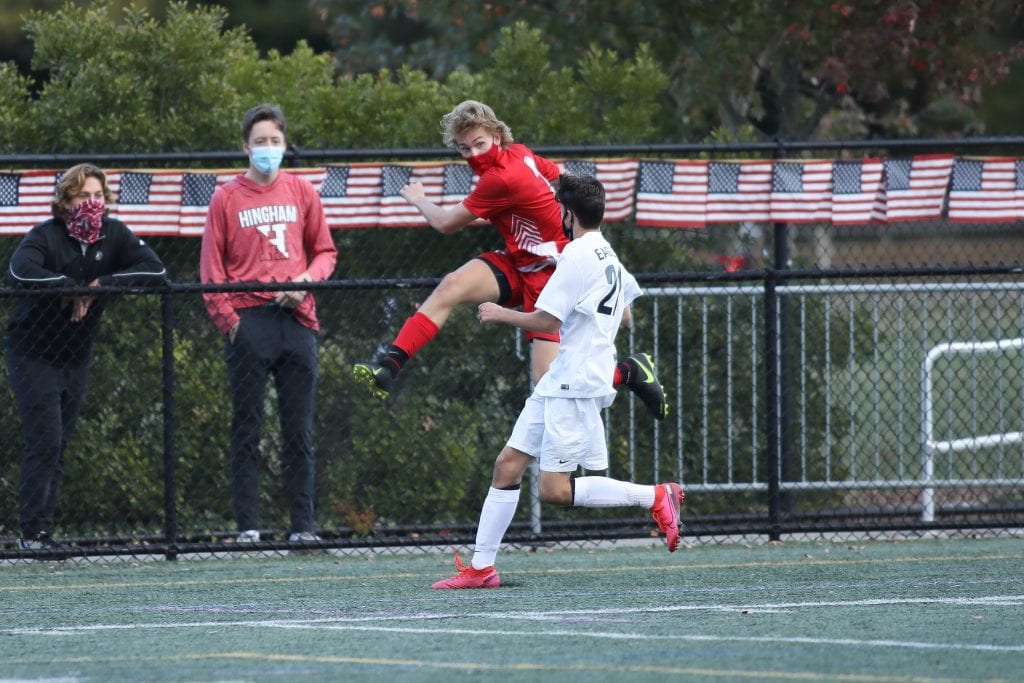 Junior Connor Hartman saves a ball from going out of bounds in the 4th quarter. 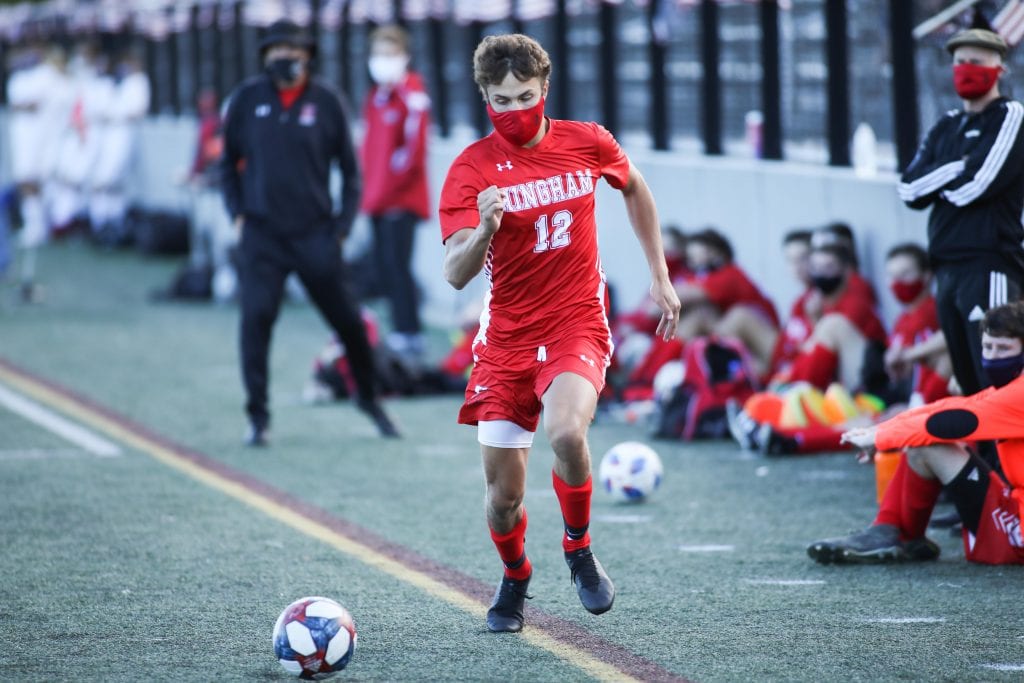 Junior John Sula races down the sideline at the Harbormen keep the pressure on late in the game. 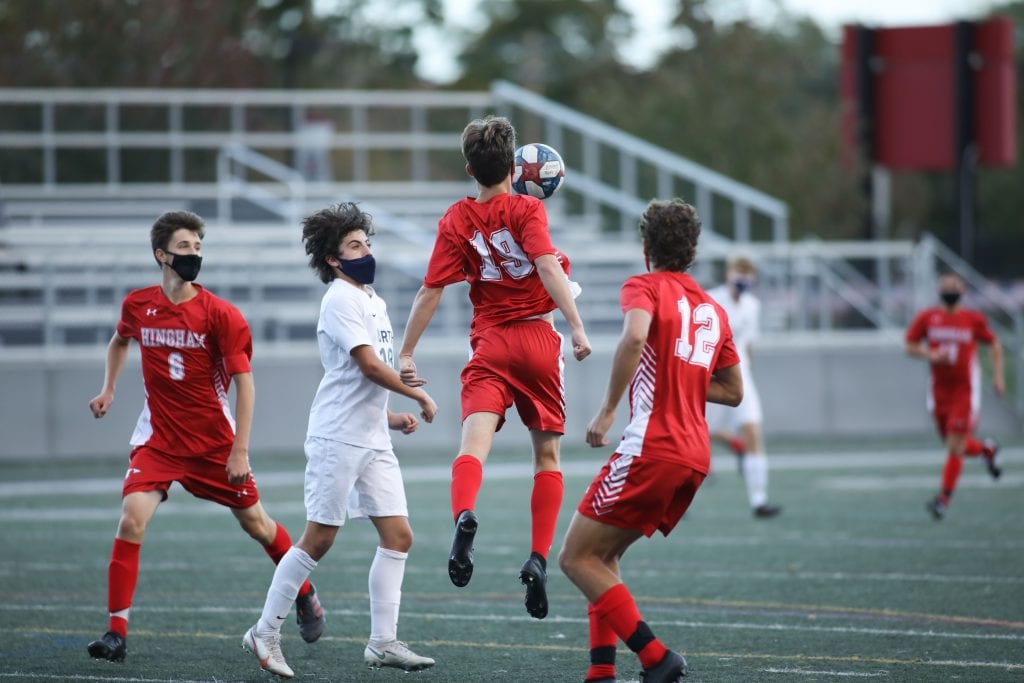 While heading the ball is not allowed, using your chest is, shown here by junior defensemen Curtis Murphy.