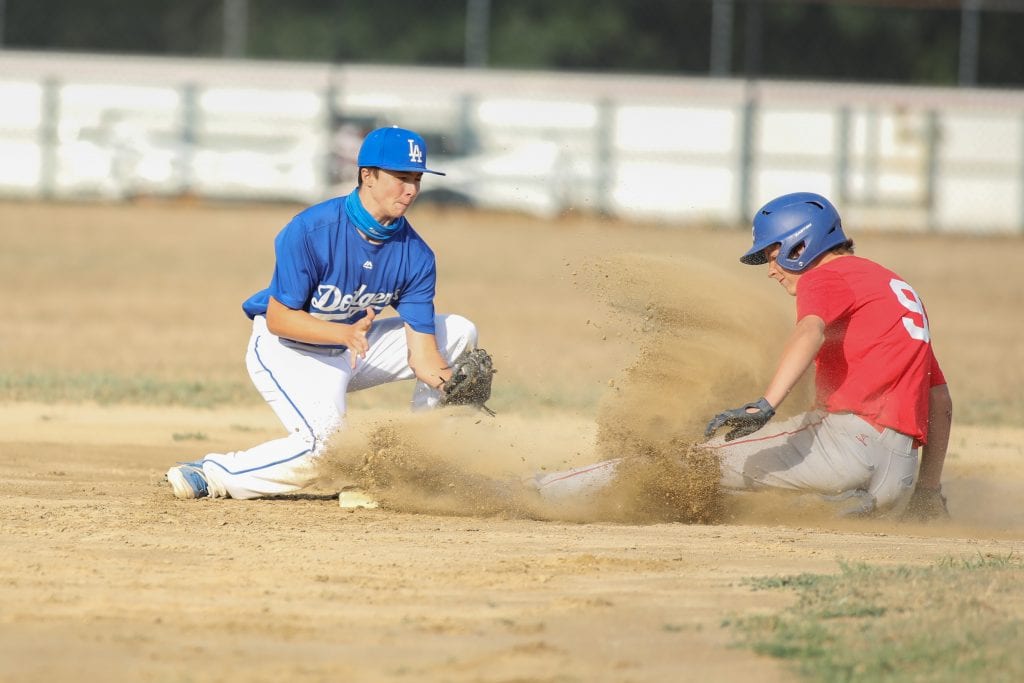 The Cardnials' James Rozanitis slides under the tag of Dodgers' SS Teddy Swanson during the championship game. (Photo by Joshua Ross Photography)

There was arguably better baseball being played on the fields of Hingham than at Fenway Park last week!  Both Hingham/Hull Babe Ruth and Hingham Little League held their season ending playoff games every night last week with both championship games played on Friday night.  In an anything but ordinary season, the games throughout the week were certainly entertaining, competitive, and fun to watch.

The newly revamped league this year, led by new HHBR President Marc Swirbalus, attracted a new group of kids by changing some rules and getting back to baseball fundamentals.  One big change was reducing the age limit from 16 to 15 years old.  The goal was to get more 13 year olds to make the jump from HLL to HHBR without having to worry about high school players throwing 75+mph fastballs by them.

"In past years, there was a perception of a drop-off going from Hingham Little League to Babe Ruth and the quality of play this year was better than I've ever seen it before." explains HHBR coach Doug Banks, who has been coaching in this league for the past three years.

The league successfully fielded six full teams, each playing 11 regular season games, then a week of playoffs.  Every team made the playoffs and played at least one game.

The Cardinals took home the championship after having to play three games in five days, including beating the second seed Giants, and the top seed Dodgers.  Impressive pitching by Chris Swirbalus, Chris Volpe, and Johnny Dwyer allowed the Cardinals to outscore their opponents 39-9 in the three games.

"I wanted the season to go as smooth and safely as possible," Swirbalus said. "Starting off we were all just excited to be outside with our friends again.  But our focus quickly turned to wanting to improve, grow as a team and play to win. I told my Cardinals team during our first practice that our goal was to win the 2020 Championship."  His full statement and recap of the Cardinals' championship season can be read here.

Although there were some new policies and new faces this year, the consensus was the season was successful and the players had fun on the field.

"Marc Swirlbalus did a fantastic job of taking over the league," Banks tells the Anchor.  "In past years, there seemed to be a little unorganized as well as some communication issues, and this year there was none of that.  The upgrades were noticeable on everything from new uniforms, an organized schedule of games & playoffs to a website that was updated daily with all current player and team information."

Baseball is not totally over for these kids.  HHBR will be fielding three Age Group All-Star teams for an upcoming tournament with other Babe Ruth towns.  There's also discussions for some fall baseball as well.

Photos from all the HHBR playoff games can be found here.

In a normal year, Hingham Little League has over 700 players and over 60 teams.  However, HLL had to make significant changes in order to play this year, including cutting out three divisions; almost 500 kids.  They were left with 10 Majors teams and eight AAA teams.  But as with HHBR, the quantity of play didn't affect the quality of baseball played on the fields.  The coaches, players, and parents were all committed to get the season played and followed the new safety and cleaning guidelines as required, which gave the kids a Little League season they deserved.

In a dramatic last inning come-from-behind win, the Red Sox scored six runs in the bottom of the 6th to stun the top seeded Royals and take the crown.  After getting off to a slow start at the beginning of the season, Coach Ryan Thornton notes the teams positive attitude.

"What stands out most to me as the coach was the "never-quit" attitude that ran through each and every player all season long," explains Thornton.  "On top of that, this group of kids cheered and rooted for one another constantly, and I truly believe that persistent and positive energy helped the team to finish the season with a six-game win streak, including the three playoff games."

The championship game started with the Royals taking an early 3-0 lead in the first inning.  With impressive pitching on both sides, this scored kept through the bottom of the 5th when they increased their lead to 5-0 after a two-run triple by Alexander Rozanitis.  The Red Sox's bats finally caught fire in the top of the 6th racking up six hits and one walk resulting in six runs and the lead.  The bottom of the 6th saw Red Sox pitcher Brendan McCarthy throw a 1-2-3 inning securing the championship for the Red Sox.

A great ending to a memorable season.  Photos from the championship game can be found here.