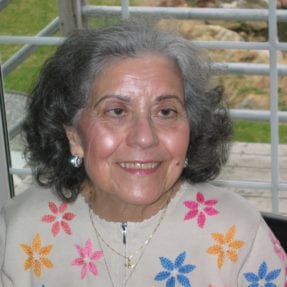 Elvira Darmiento, 92 of Hingham, Massachusetts passed away on Saturday, December 12, 2020.  She was born in New York City on October 6, 1928 , to a large Italian immigrant family, the youngest of seven children of Anna and Joseph Matarese. She attended Evander Childs High School in the Bronx and graduated from Hunter College of the City University of New York in 1950 with a B.A. in Biology and Physiology. Her Alma Mater’s motto were words she firmly took to heart: “Mine is the Care of the Future.” It informed the main passions of her life: her family, health education, social justice and environmental conservation.

She began her career teaching as a graduate assistant at Vassar College, and worked in New York City as a research associate involved in pioneering neurological studies at the Rockefeller Institute for Medical Research, followed by work with early x-ray diffraction equipment for North American Philips. After marriage and a decade hiatus raising her children, Elvira returned to the workplace teaching Biology at Rosary Academy and Nyack High School in Rockland County, New York.

While teaching, she earned a Master of Science in Health Education from Herbert Lehman College of the City University of New York. She later relocated to the Boston area in 1977 to begin a new life chapter spearheading an innovative health education program in Weymouth Public Schools. There, she taught for the remainder of her career until her retirement in 1999. A passionate health educator, she forged community partnerships championing such issues as the war against drinking and driving, drug and alcohol abuse, suicide prevention and teen pregnancy. For two decades, she influenced a generation of students from Weymouth South High School and South Middle Intermediate School to embrace healthy lifestyle choices.

Elvira donated generously to many charities and was deeply committed to social justice and environmental protection and conservation. In the 1970’s she crewed on the Hudson River Sloop Clearwater with the legendary folk singer Pete Singer, and helped in their efforts to educate the public about the importance of cleaning up what was then one of the most polluted rivers in the nation. A woman ahead of her time, she was active in the community organizing celebrations for the first Earth Day in 1970.

Spending time with family was what Elvira enjoyed the most. She bestowed a strong love of nature, education and lifelong learning to her children. She was the beloved mother of Lisa (Darmiento) Giudice, Madeleine Darmiento, and Laurence Darmiento and cherished grandmother of Roy and Corrado Darmiento. All her siblings -- brothers Alfred, Louis, John, and sisters Mary, Josephine, and Eda -- passed on before her.

A private Mass was celebrated in her memory at St. Paul’s Parish in Hingham followed by burial at Hingham Cemetery. In lieu of flowers, the family requests memorial donations be made to Doctors without Borders (Doctorswithoutborders.org).