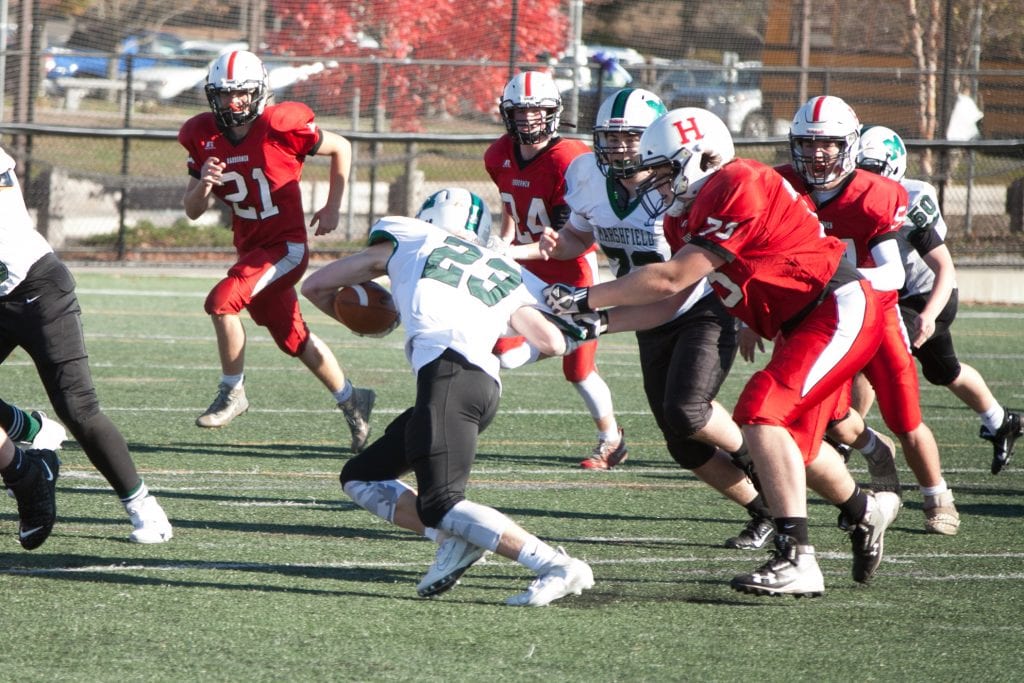 Last year's freshman football team looking to get back on the field playing for the Varsity or JV teams this fall. (Photo by Joshua Ross)

The MIAA held a Board of Directors meeting today (Tuesday, July 21) where their COVID Task Force presented their recommendations; despite these projections, the ultimate decision will come from guidelines set from the state's working group (comprised of members from DESE, the Energy and Environmental Affairs office, and the Governor's office), which will be issued at a later date.

The Task Force last met on July 15th and voted on three recommendations to be presented to and voted on by the BOD:

All three recommendations were passed unanimously by the Board of Directors.

Additionally, the Task Force released the results of the survey they previously issued to superintendents, principals, ADs, coaches, trainers, and other decision makers in districts; they received over 1,000 responses. The results can be found here.

Also joining the call was DESE Commissioner, Jeffrey Riley. Riley, who didn't offer up too many specifics, reiterated the state's eagerness to have sports in the fall, as long as it was done safely. He anticipates the recommendations from the state's working group to come out by the beginning of August and to have the guidance on transportation out by this Friday.

Hingham Athletic Director Jim Quatromoni is on the MIAA Covid-19 Task Force and offers some unique perspective on today's meeting: "The Task Force will continue to work and come up with recommendations for the districts to follow while waiting on the final guidance from the state."

Quatromoni told the Anchor, "Just like DESE is making recommendations for academics, we are doing the same for different scenarios for athletics."  He then added he anticipates a decision sooner than later as that the state's working group is meeting regularly.

When asked about the differences between high school sports and club or youth sports, he responded by saying, "As a public school, we are a government-run organization and must follow the specific guidelines. Our approach is educational athletics, which incorporates both school and sports, where other organizations can just focus on playing those sports."

One of the questions that often arises is whether or not some high-risk sports will be cancelled, and if lower-risk sports would still be allowed to play. However, Quatromoni says, "It's too early to be making comments on those situations yet. Hingham is in a strong league (Patriot League) with hard-working people, who will be able to figure out how to get the games played safely."

One of those hoping to get back on the field is Girls Varsity Soccer Captain, junior Alexa Varholak. She said, "I am happy the MIAA hasn't cancelled the season yet. We all understand the state's concern with keeping everyone safe. We have a very promising group of players this year and want to get back out there and prove people wrong." Varholak added that while she would prefer to have some sort of playoffs, she really just wants to be able to get back out on the field with her teammates and start playing games again.

Girls soccer, along with most fall sports, have been holding captain's practices and off-field conditioning. Although these practices are not sanctioned by the league or the school, specific guidelines were sent out by Quatromoni and Principal Rick Swanson to make sure every safety precaution is being followed during these workouts.