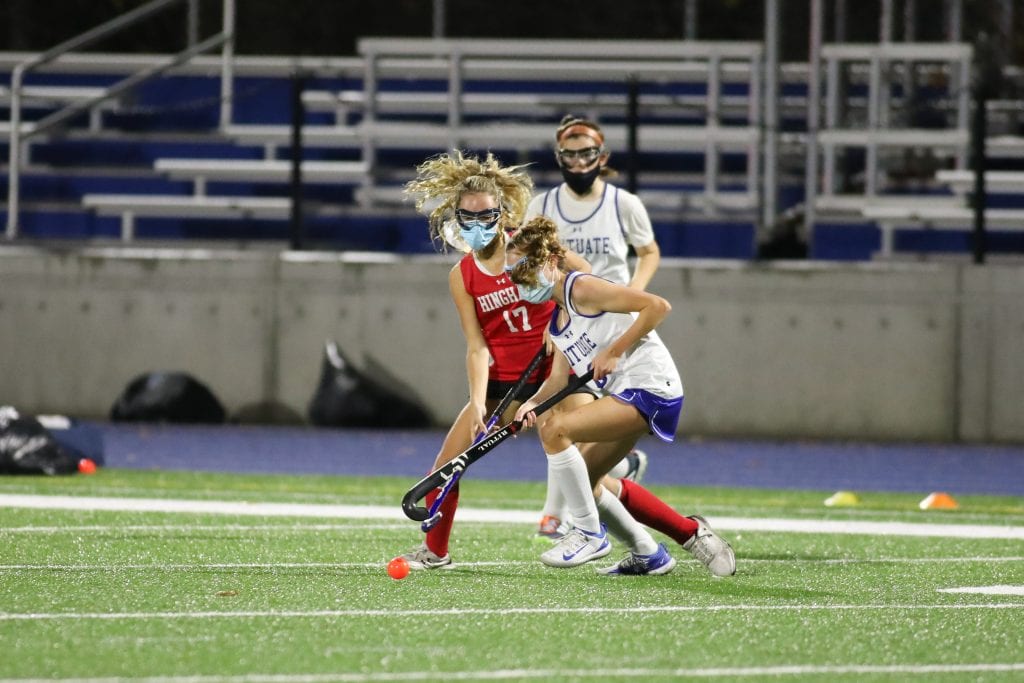 Senior captain Cameron Frank battles for the ball during the team's playoff game vs Scituate.

Regardless of the outcome, 2020 was a season to remember for the Hingham High School Field Hockey team. When we look back on the 2020/2021 high school sports landscape, we will think of terms like modifications, masks, and quarantines; however, HingFock (as they call themselves) will think of terms like perseverance, dedication, and appreciation. While they were eliminated from the playoffs on Saturday, coaches and players agree that the wins and losses were not the only measures of success this season.

"Every moment we got to play meant so much more, especially this year," says senior captain Cameron Frank. "I think that all things considered, the season went great. We were all just so grateful to finally have some human interaction. Staring at a computer screen all day has taken a toll on all of us. Being able to get outside and play field hockey with my team was the highlight of every day this fall."

The team ended the regular season with a second seed in the Keenan Division of the Patriot League Cup. In their first game last week against Scituate, they battled hard and fell to the top seed 2-1. The Patriot Cup is a double-elimination tournament, so their loss slotted them into the bracket to face off against Silver Lake on Saturday. It was a close game, hard-fought throughout, and scoreless until halfway through the fourth quarter when Silver Lake was able to score for the game's only goal.

"The game on Saturday was well played by both teams," Head Coach Susan Petrie tells the Hingham Anchor. "I honestly could not have asked the girls to work any harder than they did on the field the last few games. Both of our last two games, we lost by a goal in the fourth quarter. After being in quarantine and not running at all for two weeks, it's hard to jump right back into games in peak physical condition, especially in the 7 v. 7 formation, so fatigue does end up being a factor. I have to give a lot of credit to our goalie, Maddie Decelles, who made some huge stops in the last few games to keep us in the hunt, and really to everyone on the team for never giving up, playing hard until the very last whistle."

The competition on the field wasn't the only thing they had to battle this year.  The Hingham Field Hockey team had the unique distinction of being the only HHS fall sports team to have a positive COVID-19 case on their team, requiring them to quarantine for two weeks towards the end of their season.  While this presented a whole new set of challenges for the girls and coaches, they took it in stride and made the best of it.

"I have to say, as much as quarantine was difficult, our zoom workouts were a highlight as well. We managed to have a lot of fun while trying to stay in shape. I'll never forget our 'tik tok dance inspired' workout we did on the last day of quarantine - it was quite the experience. And finally, returning to the field in the snow on Halloween was really special- the parents were there to cheer us on, and it was just so great to see each other in person again and get back to what we all love doing- playing field hockey," Coach Petrie adds.

"The most challenging part of the season was definitely having to miss two weeks and go through a quarantine as a team. However, we came back strong and ready to get back into the game. During our quarantine, we participated regularly in zooms and workouts to keep in touch and in shape. I think we all handled the situation very well and it made us even more grateful for every moment we had together on the field."

The adversity the Harborwomen faced this season gave them the opportunity to bond and come together as a team, perhaps more so than in previous years.  The team was lead by six seniors - captains Frank, Cole, and Maddie Decelles, along with Katie Hartnett, Betsy Gross, and Coco Hernberg.  Coach Petrie had nothing but praise for her leaders.

"My seniors were fantastic this year - they found a way to welcome the new members of the team, to make everyone feel welcome and included, and to keep the team going through all of our ups and downs. Senior night was really bittersweet - I was so happy we were able to have it, but I'm also so sad to say goodbye to the six of them."

As this season ends, it's hard not to look forward to next year's team.  There will be a number of very good players coming back next year including juniors Kyle Wilson and Kenzi Wilson, two of the top goal scorers on the team. Also, sophomores Abbey Kennedy and Ellie Savitscus, both of whom made a big impact this year logging a significant amount of playing time.

Coach Petrie is already excited about next year.

"I'm looking forward to hopefully going back to 11 v. 11 field hockey. Honestly, I'm looking forward to everything about next season. As soon as our season ends, I take a few days to reflect on it and feel sad that it's over, and then it's right into planning for next year. As hard as it will be to replace the seniors, I have ten varsity players returning next year, and they will all be impact players on the field. Some of them have already been on varsity for two or three years, so they really know how to play with one another on the field. They are (as always) a really fun bunch, and I look forward to enjoying another fall on the field with them."