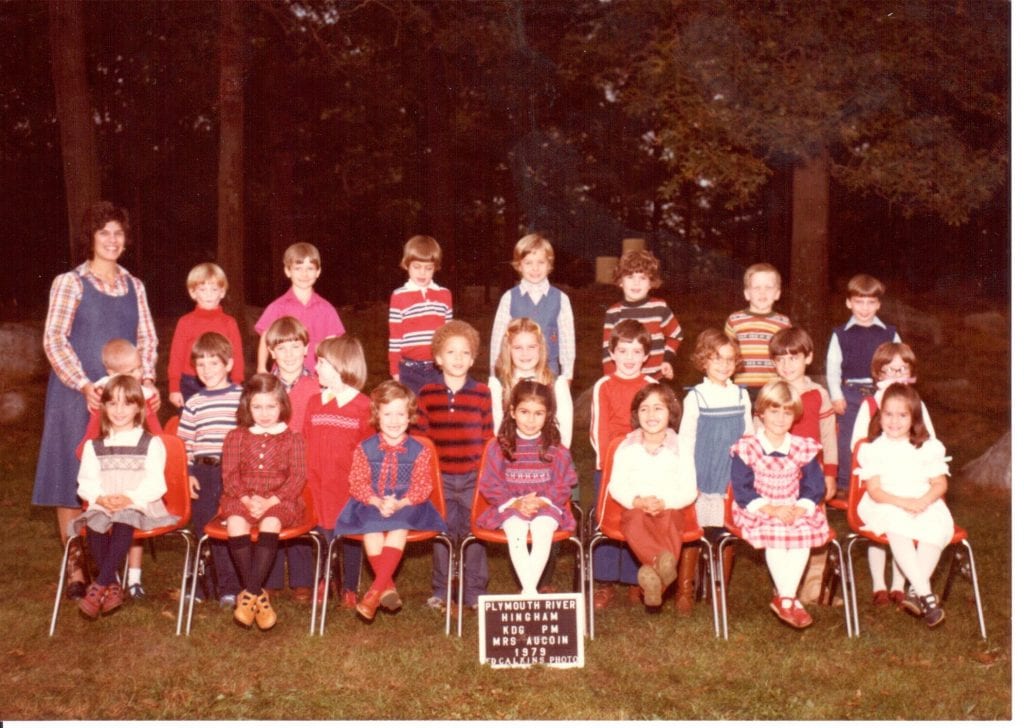 My mother still recalls how PRS looked like something out of a storybook, as it was built in the middle of a former apple orchard.  The neighborhoods that now stand on either side of the school were all woods and farmland.

When the principal showed my parents around the school, their jaws dropped to the floor.  The classrooms were huge, with shiny new walls and all new furniture.  They were told how PRS was a lab school, where educators from around the world came to study best practice and new techniques.

Plymouth River was even featured in Reader’s Digest and boasted a state of the art, student-run, television studio.  My father turned to the realtor and said, “Please only show us houses in this district.”  He was determined that his two little girls (soon to be three) would be students at this gorgeous school.  Little did he know just how integral PRS would become in his daughters’ lives.

My sisters and I flourished during our time at PRS.  We took part in plays, ice skated on the pond during recess, competed in spelling bees, worked on group projects, rejoiced on field days, were celebrated at award ceremonies, and were beat reporters and news anchors on PRS-TV.

We belonged to a tight-knit community with everyone pulling for each other’s success.  Most striking to my sisters and me, however, was the passion that our teachers had for their profession.  They inspired us, challenged us, and celebrated our success.  We wanted to be worthy of their praise.  We raced home every afternoon to play school and mimic the words and actions of our prized teachers.  It is because of our Plymouth River teachers that my two sisters and I became educators.

In college I majored in elementary education.  During my senior year, my professor asked where I wanted to complete my final practicum.  Without a moment’s hesitation, I chose Plymouth River.  Of course I wanted to return to my role models, my idols, to help me learn the infinite details that come with being a teacher.  After graduating from college, and thanks to a construction boom in Hingham that year, I was hired as a full-time classroom teacher at Plymouth River.  Twenty-four years later, I am still lucky to call myself a PRS Wizard.

Our sweet little building has gone through many changes throughout her 50 years.  In 1969, when the school was completed, educational research and philosophy stressed the importance of group work and the group process.  After all, that year it was a group of space engineers who successfully launched a man to the moon.

Learning alone, in isolated rows, was being phased out.  The PRS classrooms were built to have retractable walls and all of the furniture was on wheels to encourage fluid groupings between classmates across the grade levels. My students always wonder how we were able to concentrate if there were no walls between our classroom and the ones on either side of us.

"How did you concentrate?  Wasn’t it loud?” they ask.  These questions immediately lead to the stories of the “Black Bench.”  Anyone who went to Plymouth River always knows about the “Black Bench” and loves to tell tales about it.  It struck fear in the hearts of children throughout their time at PRS.

Ironically, it was a little, innocent, comfy leather bench that sat under a sign that read “Love One Another.”  But, all your teacher had to do was merely hint about sending you to sit on the bench and you immediately behaved!  My students, without missing a beat, fire off the question, “Mrs. Kilban, did YOU ever get sent to the Black Bench?”  I am proud to say that in my K-6th grade years at PRS, I was never sent to the Black Bench!  (Although, being a very chatty child, there were a few close calls!)

Today, the “Black Bench” has been replaced with progressive classroom management techniques.  Gone too is the original '70s orange and pea-green color scheme, and most of the retractable walls have been replaced by permanent ones.  (My room is only one of two rooms in the building with not one, but two, original retractable walls).

My two sisters also joined the staff at PRS.  My younger sister, Nancy, was a math specialist, and my older sister, Maura, teaches fourth grade.

What hasn’t changed is the sweetness of the school’s design.  Still nestled in the woods, our building feels so cozy as you approach it.  Visitors are still greeted by the beautiful natural landscape, and apple trees (from the original farm) grow near the entrance.

“Cheese Island” still sits in the driveway’s center island, and class photos are still shot on the lawn next to the flagpole.   When you walk down the halls, you see the most angelic pieces of student artwork and celebratory displays of students’ success.  You hear the sweet sound of children singing in the music room, can smell lunch being cooked for the masses, hear the laughter of students at play during recess, and are always greeted with a smile and a hello from all who pass down the hallway.

In my 46 years on Earth, 32 of them have been spent at Plymouth River.  I thank my lucky stars that fate brought my parents to PRS that day in 1974.  She’s been the cornerstone of my life for so long and has brought me so much happiness, contentment, success, and pure joy.  I can’t wait to see what her next 50 years brings!