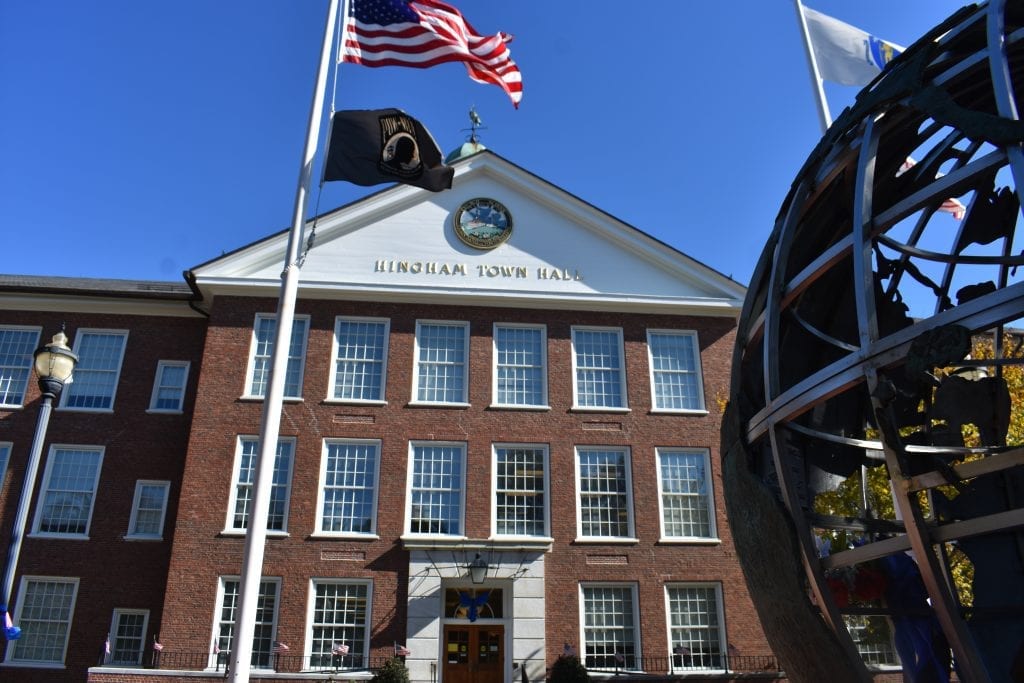 Following recent controversies centering around a denied request to fly the Pride flag at Town Hall during Pride Month in June and the recent selectmen's directive to the Hingham Fire Department to take down the Thin Blue Flags displayed on fire apparatus, the Selectmen last night started a conversation about what the process for developing a flag policy might involve.

Selectmen Chair Mary Power identified what she considers to be the four-step process: to document the town's existing flag-flying practice for town assets; obtaining input from town employees -- including the fire and police departments -- interested groups such as the Hingham Pride Committee and the Hingham Unity Council, the American Legion, Veterans Council, and other members of the Hingham community; to ask town counsel to perform an oral or written analysis to provide guidance on what legal considerations, if any, might be involved if the town's existing practice were modified; review and discuss input received and to listen to further questions, ideas, and concerns from citizens at a future public meeting; and to take a vote sometime in September on whether to modify the existing town flag-flying practice.

This long-standing practice limits flag displays on town property to the flag of the United States of America, the flag of the Commonwealth, the Town of Hingham flag, the POW MIA flag, a flag in memory of veterans of World War I, as well as flags flown to commemorate Peace Officers Memorial Day on May 15 of each year. The town’s flag practice was explained by town counsel in a public session of the board of selectmen in June.

Town Administrator Tom Mayo, Asst. Town Administrator Michelle Monsegur, and other Selectmen's Office staff will gather information from Hingham's benchmark communities about any formal flag policies they might have in place and how they are working out, which might be used as a basis for any future Hingham flag policy.

Selectman William Ramsey shared his thoughts. "A flag is a piece of cloth, but flags project a tremendous amount of feeling for people, affecting different people in different ways. So it's difficult for a board to be the arbiter of which ones to fly," he said.

That said, Ramsey went on to say that any policy must be "consistent throughout and be able to survive a legal challenge."

Selectman Joseph Fisher said it's important to focus on good communication -- "what we're talking about" -- such as town assets -- which are subject to the jurisdiction of the board of selectmen -- and school assets, which are not.

Fisher observed that symbolism means something different to various groups -- "I need to understand [what the different meanings are]," he said.

Power emphasized the importance of all voices being heard on this issue. "Some may prefer to share their views in writing," she said. "This is a subject of immense public interest, and we don't want to shortchange the conversation."