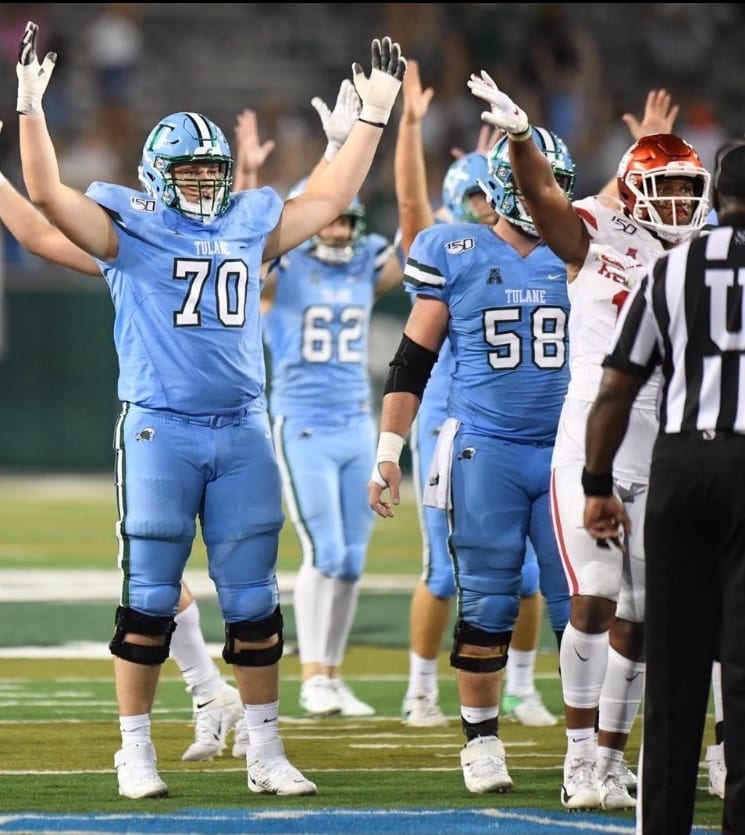 When Hingham High School graduate Tim Shafter, who currently plays college football at Tulane University, was summoned to the Head Coach's office, he thought to himself, "Uh-oh, what did I do?"

Usually it's not a good sign when the coach wants to see you in his office, especially as a walk-on football player at a Division-1 school.

Shafter only became more anxious when Coach Willie Fritz asked him, "Can you call one of your parents?"

Tim nervously got his father Andy on the phone and soon realized the situation was not what he had been expecting as Coach Fritz told both Tim and his dad that he was receiving a scholarship to play football at Tulane.

"I lost it a little bit," Tim says. "My dad was really reserved, just because coach was on the line too; I don't think he wanted to embarrass me. It was an awesome experience to have the coach tell me and my dad that I was now on scholarship."

(Check out the video of Coach Fritz telling his fellow teammates Tim was now on scholarship.)

It all began when Shafter starting playing football in sixth grade; he would continue playing through high school.

"He was actually the first one that gave me a chance to play,” Shafter shares. “He moved me to right tackle where I was able to start the last two years of high school, and those last two years were some of the closest teams I've been a part of! I learned about team camaraderie and what it was about to play football. I loved every minute of playing in high school.”

"We were struggling in our first game,” Chris Arouca told the Anchor. "I remember saying, ‘We just need someone to play right tackle!’ That’s when Tim said, 'Coach, I'll play right tackle,’ and he never left.

From the second game of that year on, he kept getting better and better. He went from being a timid kid at the start of his junior year, not so sure of himself, to being a really, really good football player by his senior year. He was just a hard worker and had a good attitude about football. I can't take credit for that,” Arouca adds.

However, it was never Tim's plan to play past his final season at Hingham High School in the fall of 2016. He says had made peace with the fact he wouldn't play at the next level–then, months later, during a visit to his sister at Tulane over Easter break, everything changed.

While hanging out at his sister's Erin's apartment, Tim started chatting up her roommate's boyfriend. They were talking about football when Shafter learned that he was talking to the recruiting manager for the football team. Later that afternoon, he got a text asking if he and his dad wanted a tour of the football facilities. The next morning, Tim, his dad, and his brother were guided through the state-of-the-art-facilities of a D1 program, which ended with an offer to walk-on the football team.

"In 24-hours, I went from not playing football again to possibly walking on a Division 1 team: it was surreal!" He says.

The first year was "a little rough." Tim, who was three inches shorter and 50lbs lighter than he is currently, was on the scout team for his first two years. However, he continued to do what he has always done - work hard and have a good attitude. His dedication and determination paid off when he was promoted to the traveling squad last year. After that, he began playing in almost every game!

"Playing in Auburn in front of 90,000 people is unbelievable," he shares. "But also being able to travel back home and play in-place like Army, Navy, and Temple is really cool; I was able to have a lot of friends and family at those games. Being able to transition from just being on the practice squad, where I never thought I would play, to now being on the field in front of all those people, [including my] family and friends, is really cool."

This week, Tim will be giving back to his alma mater: he will be participating in a panel discussion for all current HHS football players and their parents to talk about his experiences and advice on playing at the next-level.

Tim says, "The things that I have learned from football I will take with me for the rest of my life–to manage your time, to work hard, and to be dedicated to something you really love."