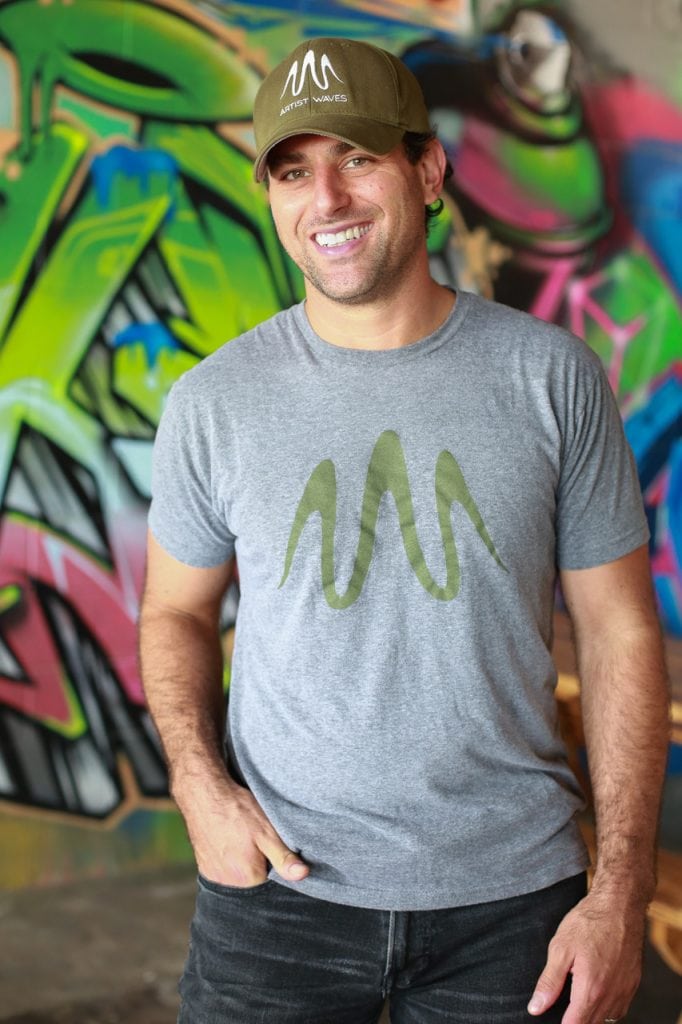 Jeff Gorra, Founder of Artist Waves lives in Hingham with his wife and four children, yes four children. How he finds the time to have a full time job, run Artist Waves and raise his four awesome kids, we’ll never know but the Anchor salutes him.

Tell us a little bit about yourself (your background, family members, passions, etc)

I’m from northern New Jersey. My wife Kelly and I moved to Hingham seven years ago. We live somewhere in the middle of town with our four young kids (Jake 6, Lily 4, Matthew and Parker 1). I have been in and around a combination of music and writing my entire life. Whether it was playing in bands, working in radio and Live Nation, writing songs or attending countless concerts, it has always found a way to be ever-present. I launched Artist Waves November 1, 2016.

What inspired you to start Artist Waves?

After writing for numerous other platforms, I wanted to continuously capture a particular voice I was not hearing enough of. I believe the arts are leading the way right now in helping to better shape and embrace cultural efforts – by being courageous and taking chances. It’s always been important to me to illuminate great art, the process behind it and its ripple effects. Where did you write that song? And why? What were you tapping into and what does it mean to you now? The role of the artist is to make people think and feel. Artist Waves is an outlet where you can both write from that perspective and showcase great work that exemplifies it. The ultimate goal is to inspire the person on the other side through a connecting takeaway of thinking and feeling.

Personally, I wanted to only write from a place that’s a real thing — it’s something I I’ve lived through or have seen somebody else live through. It’s more engaging that way. I wanted art on art. There didn’t appear to be many doors open that contained that platform, so when all doors are closed sometimes you’re better off making your own building.

Who is the most inspiring musician you have ever met and why?

Chris Cornell. He was so generous. In fact, his words of encouragement guided me to start Artist Waves on my own. There’s not a day that goes by where I don’t think about it. I miss him dearly but remain grateful for all he gave and continues to somehow give.

If you could interview any musician in the world, alive or dead, who would it be.

John Lennon. I was born the same day he died and have been fascinated with him ever since. A really deep guy who wrote some of the greatest and thought-provoking songs of all time.

If you could introduce any musician to your children, who would it be.

When presented with two options, when did you make a choice that totally changed the course of your life.

Six years ago, I was reading an interview with an artist I admire, and I was frustrated with the lack of emotion that was captured. I felt – this group has so much to offer that is either being ignored or edited out. I initially let it go and moved on. But something lingered, and I thought the only way I am going to hear about what I want from this artist and others alike was to show people myself.

The band 311 was coming to town the next week. I blindly reached out to their management for an interview, really without much credentials. After some back-and-forth I finally got them to agree. I was scheduled to speak with their frontman, Nick Hexum Saturday morning of that week (their show was Saturday night). On Friday, I was driving from Hingham to New Jersey with my wife and my oldest son (who was one at the time). Both were sleeping, and I get a call from 311’s manager. “Change of plans Nick is calling you in 15 minutes. That’s the only option,” he said. I panicked. I was on 95 in the middle of nowhere Rhode Island. I got off the next exit and pulled into the first stop I found. It was a local bed and breakfast. Thankfully, I had my recording equipment on me. I barged into the manager’s office of the bed and breakfast and asked if I could take a call. The lady was so nice and said “Sure, you can sit here at the desk next to me.” She listened in on my entire chat with Nick and gave me the thumbs up as I left. It was my first official interview of that kind - with a mainstream artist. I’ve done 115 interviews since that day and have been fortunate enough to collaborate with some amazing minds like the late/great Chris Cornell, Judd Apatow, Ken Casey, Mad Love, Levitate Festival, Matt Pinfield, Myles Kennedy, Danny Clinch, Blues Traveler, The Gaslight Anthem, etc. The 311 camp and I have also gotten close as a result. I’ve done about 10 features with them now including an entire week in their honor last summer. They are all such great people.

There was a time where I was worried about not being in a market like New York City or Los Angeles with what I wanted to do. But as this choice taught me, with enough drive, you can tap into your passion and purpose anywhere. I’m so appreciative I tripped over and read that terrible article, had the opportunity to do something about it, and the sweet old lady at the bed and breakfast.

What is the most surprising thing that ever happened to you? Something you never expected..

It’s serenity. When you have a moment, Hingham allows you to turn everything off and simply absorb the environment. If you take advantage of that… it can be a very natural place that spurs creativity.

Every single one that has its own dock into the harbor

I love what I am doing now, but if I had to pick it would either be… to own the New York Giants or sell coconuts out of tiki hut on the beach in Negril.

Do you have a hidden talent?

“Subway Surfing!” – this is when you get on the subway or T, you don’t hold on for the entire ride and you stay on your feet. It hasn’t made me a better regular surfer, snowboarder or skateboarder, but I never have to touch one of those disgusting poles!

I was a 2009 New York City Dodgeball champion. My team went undefeated and then we never played again. One and done.