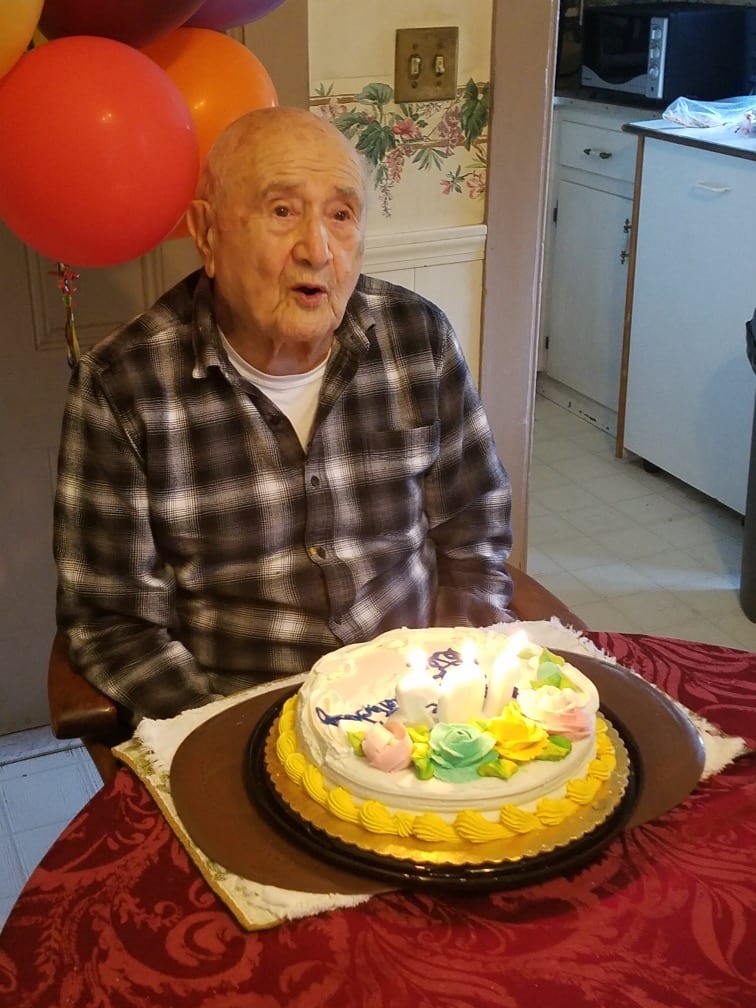 April 20, 2020 by Carol Britton Meyer (above photo courtesy of the Rando Family)

Pete was the owner of the popular Pete's Barber Shop when it was located in Hingham Centre for many years. It became a tradition for generations of Hingham families to go there for haircuts, pleasant conversation, and often a good laugh.

Pete sat in his front yard on Leavitt Street under a cluster of colorful balloons, wearing a hat to shade his eyes from the sunshine and a big smile on his face as first the fire engine, then a long line of cars and trucks, passed by where he was sitting --  blowing their horns in a friendly fashion, waving, and calling out birthday greetings. The Hingham Police also participated.

(photo above courtesy of Carolyn Antoine)

Celebratory drive-by parades have come into fashion during this time of social distancing, and Pete enjoyed every minute of it. "I had a very good time and had fun waving to everybody," he told the Hingham Anchor today. His longtime friend, Chris Thompson, organized the event, posting it on Facebook to reach as many people as possible.

Former selectman and former longtime planning board member Paul Healey worked at Charlie Cushing’s gas station -- where all the 'townies' hung out -- at the other end of the block in the 1970s. "There are a lot of happy memories of that time," he said. "There is a reason that people said, 'Hingham Centre, Best Place on Earth.'  Pete Rando was a real part of that, and it is great to have a portion of that time still remembered.  Happy Birthday, Pete!"

Mike Antoine, a retired Hingham firefighter/EMT, who participated in the drive-by celebration, started going to Pete's Barber Shop when he was a young boy. "I lived on Linscott Road and would bike there," he said. He recalls visiting then-Fire Chief Warren Lincoln in his office in the Main Street fire station after being appointed as a call firefighter in the mid-1970s. "The first thing he told me was to get rid of my 'locks' -- I had hair down to my shoulders -- after all, it was the '70s! So I walked to Pete's just down the street to get a haircut!"

(above photo of Brooklyn Pena, age 5)

Antoine remembers the kindness Pete and fellow barber Steve Spear always showed to their customers. "I liked going there and hearing all the latest townie news. Pete was a super guy to talk with and always had a great smile when you walked through the door."

Spear sent birthday greetings to Pete from Florida, where he now resides with his wife. He started working with Pete at the barber shop in 1968 and bought the business from Pete, who continued working there, in 1985. "I worked with Pete for 47 years," Spear said. "It was a small-town barber shop --  nothing fancy -- we took pride in taking care of our customers."

Pete would arrive at the shop at 6 a.m., followed by Spear at 7 a.m. "It was a great relationship," he said. "I enjoyed every minute of it."

Peter Bickford, who displayed a sign that said: "Thx for my 1st haircut!!! 1949," enjoyed the event. "The line of cars started at the end of School Street at Short Street, continuing to Pete's house," he said. "There must have been 50 cars and other vehicles." 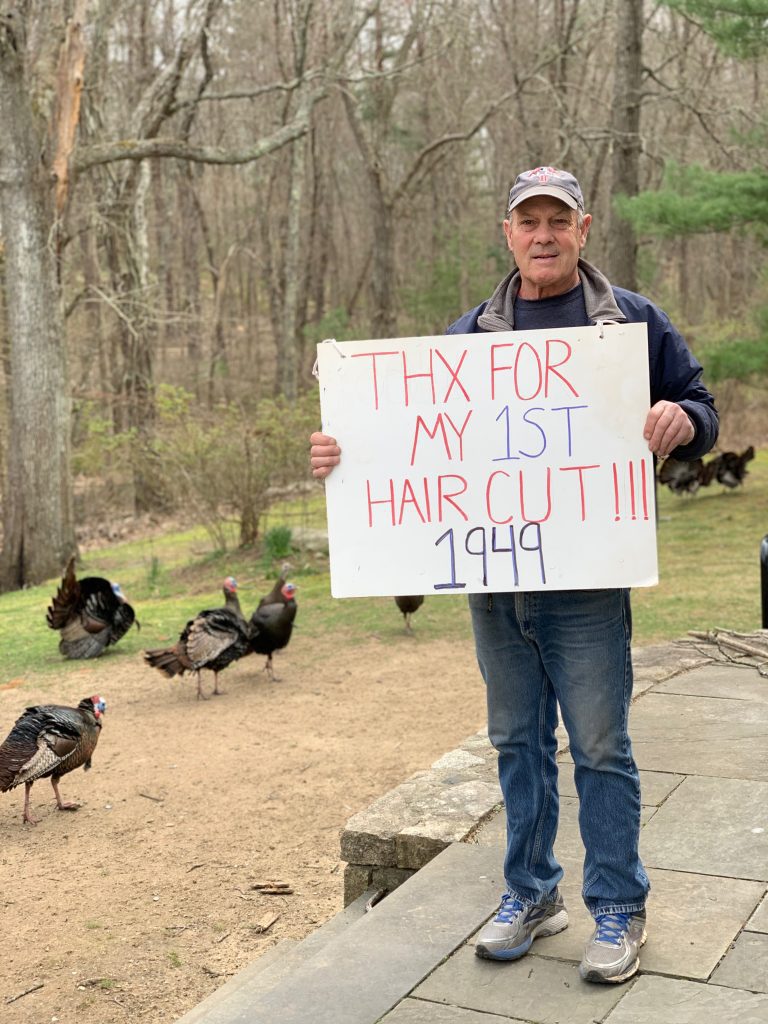 Bickford grew up two doors from Pete's house. "I was a regular customer at the barber shop through high school," he said.  "All the townies went there and told stories about what was going on around town."

Because the barber shop was so popular, there was sometimes a half-hour wait, but Bickford was never bored. "People would head over to Pete's from Charlie Cushing's. All the characters would come in. I have fond memories of the time I spent there," Bickford said. "Pete was always friendly and always nice to us kids. That's what made you want to come back. Sometimes kids would be 'afraid' to get their hair cut, but not at Pete's. He and another barber at the time, named Ivan, were always polite and gentle with the kids. Pete always had a million jokes to tell -- he was always funny, positive, and always smiling, always happy."

Bickford, who grows special tomatoes in his greenhouse for Pete to plant in his garden, will be delivering them in the not too distant future. "I start the plants for him, and by Memorial Day they're two feet high."

Thompson, who has known Pete all his life -- for 54 years -- and got his first haircut at Pete's, was pleased with the turnout. "Pete is just such a great person and a true townie."