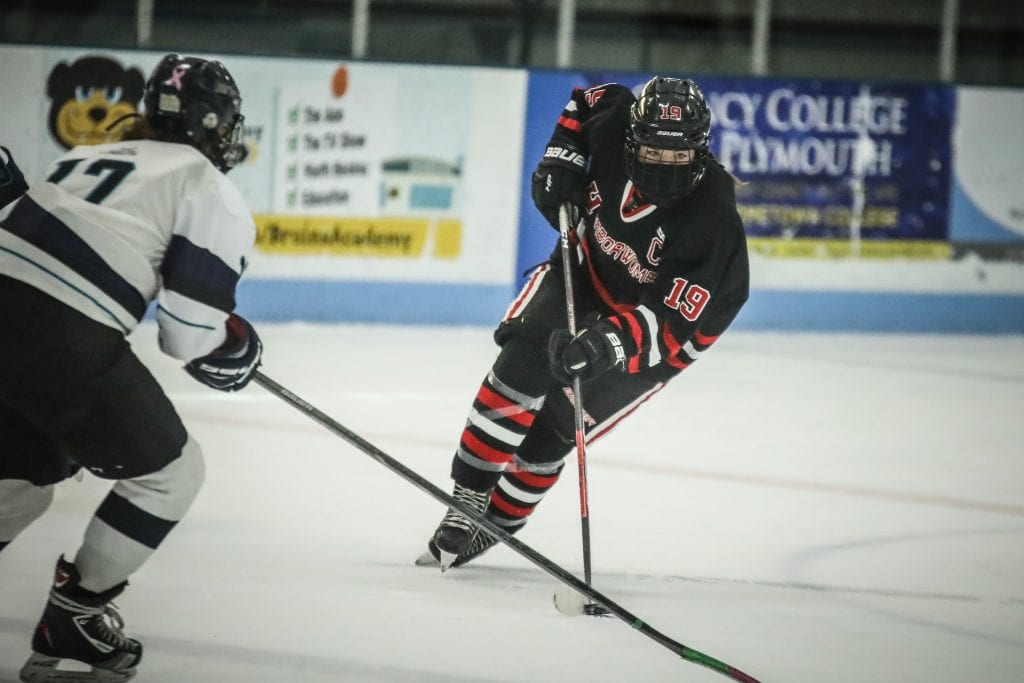 Junior captain Kathryn Karo led her team with 2 goals in a 6-2 win over Plymouth North.

The Hingham High School's girls hockey team kicked off their season yesterday in Plymouth against Plymouth North.  The Harborwomen are looking to build on last's years successful season, led by junior captain Kathryn Karo.  The team did lose some impactful players, including both their goalies, but bring in some talented underclassmen this season.

The impact of not having any preseason games was evident in the first couple of periods for the Harborwomen.  They fell behind 1-0 in the first few minutes of the game until junior Ryan Maguire tied it up 5 minutes later.  The score remained tied 1-1 at the end of the first period.

While Hingham was trying to shake off the rust, rookie junior goalie Amy Maffei was keeping them in the game.  After letting in an early goal in her first game ever in net, Maffei settled in and stopped a few breakaways and a penalty shot in the 15 minutes of her goalie career.  The former forward says it was a little scary out there.

"It was exciting," Maffei says. "I was a little nervous because it was my first game as goalie.  (My teammates) made it a lot easier because they work really hard."

The Harborwomen took the lead 2-1 in the second off a Karo goal, but Plymouth North tied it up shortly after.  It was until the the third period when they started taking over the game.  The top line of Karo, Maguire, and sophomore Piper Jordan turned it up a notch adding 2 more goals from Karo and Jordan.  The defense, led by senior Maddy Decelles, was also great in the third.  Freshman forward Reese Pompeo recorded her first high school goal as well.  Hingham pulled away in the third scoring a total of 4 goals giving them the 6-2 win.

"The kids were getting used to the tempo and speed and realizing the puck was moving faster than them and once they got that under their wing and realized they could handle the puck and make some plays, they did," Head Coach Tom Findley comments on the team's slow start. "Our goalie, Amy, kept us in there, especially stopping the penalty shot.  It gave us some momentum."

Findley also recognized not only his veterans, but some of his new players as well in the team's victory.

"The younger kids, I thought, played great, the two freshman (Pompeo and Isabel McCabe) and obviously our big scorer Kat (Karo) and that line really set the pace and they're the ones we are going to have to lean on when we play some really good teams."

"I'm very happy with the way they played tonight," Coach adds.  "We will get better." 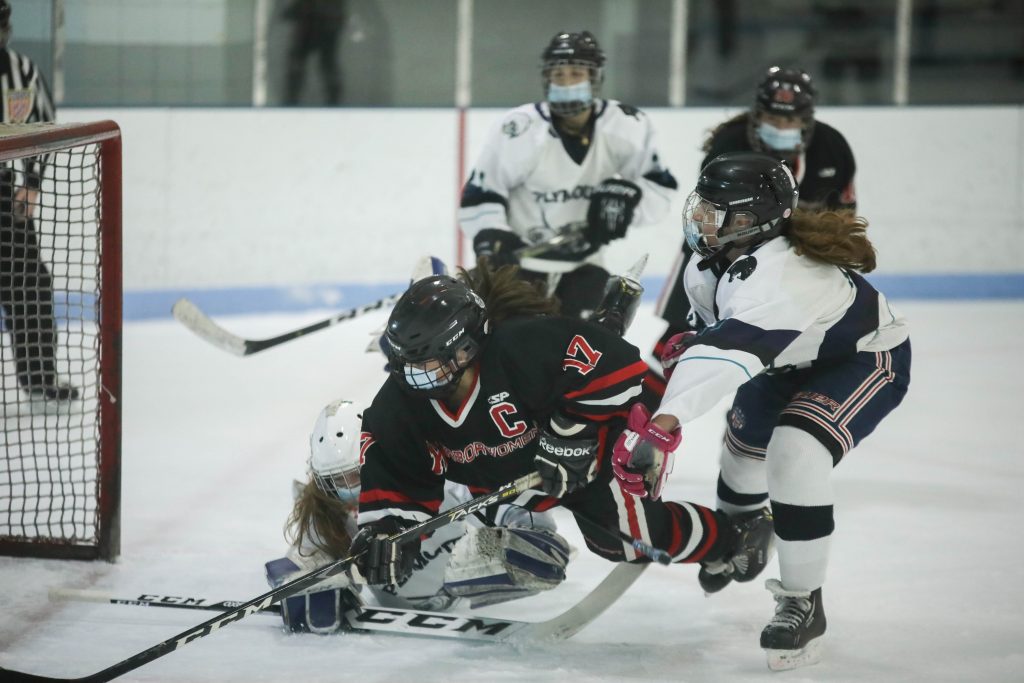 Senior captain Coco Hernberg dives in front of the net early in the first. 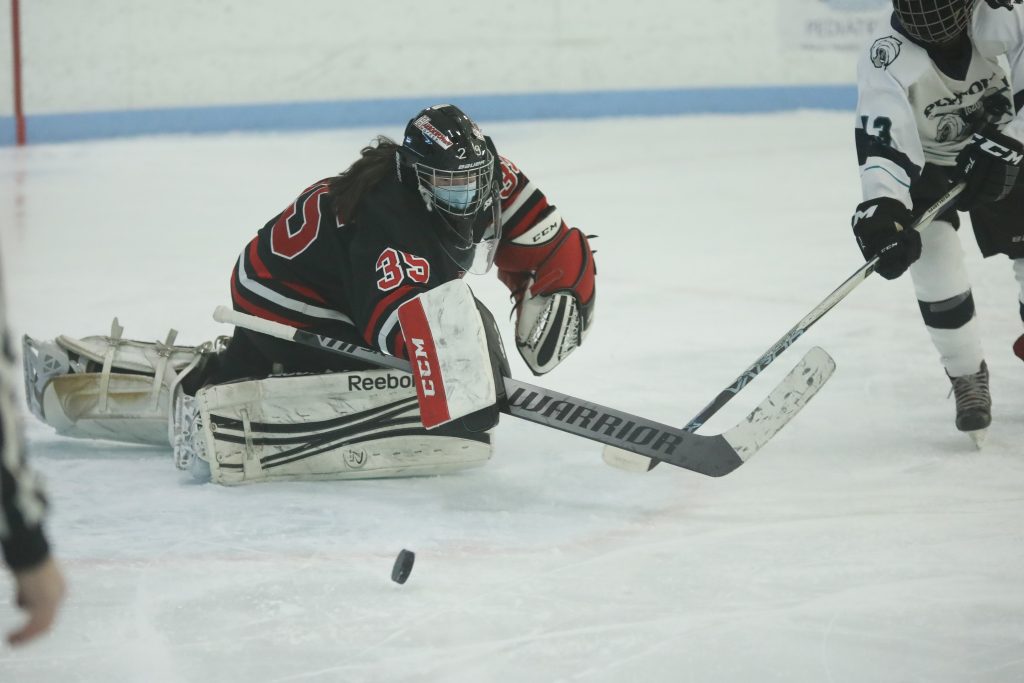 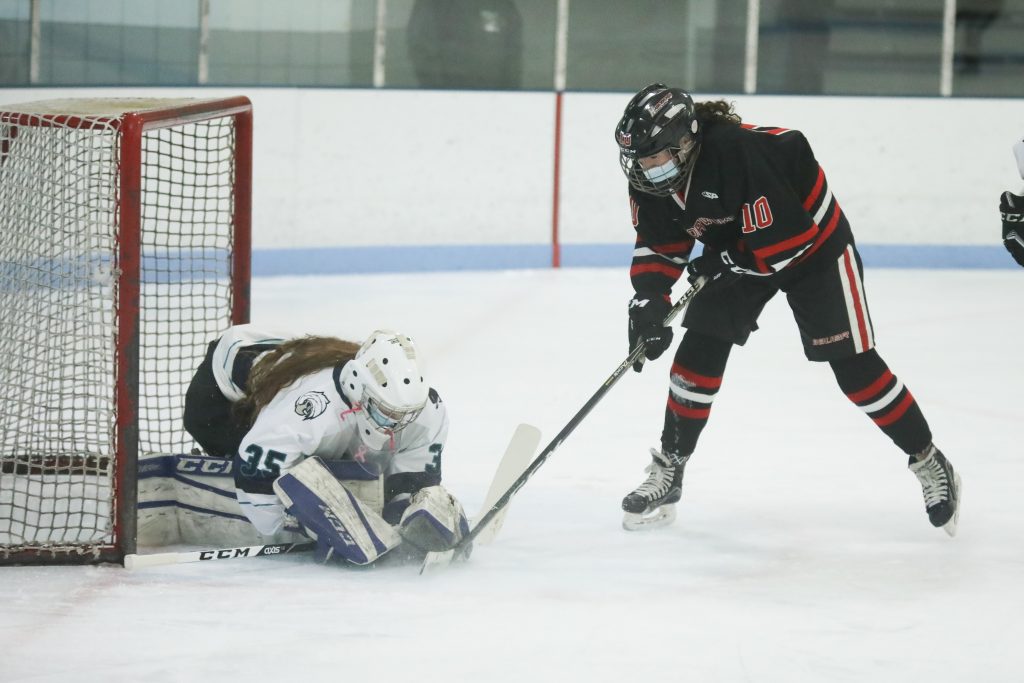 Junior Lilly Thrun tries to stuff it past the goalie. 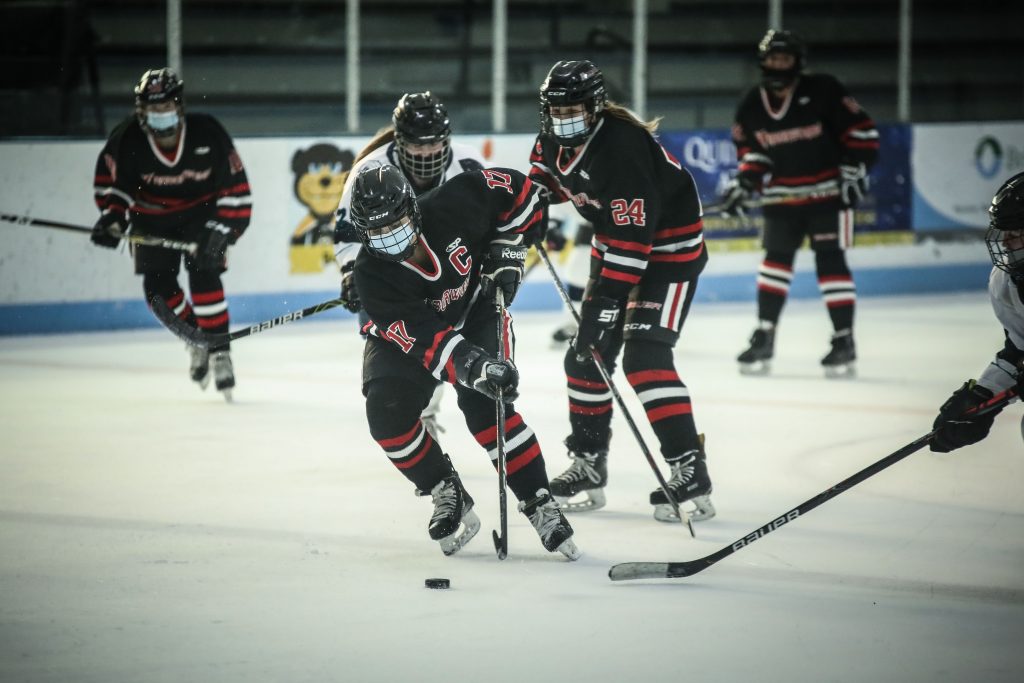 Hernberg with a break away late in the second period. 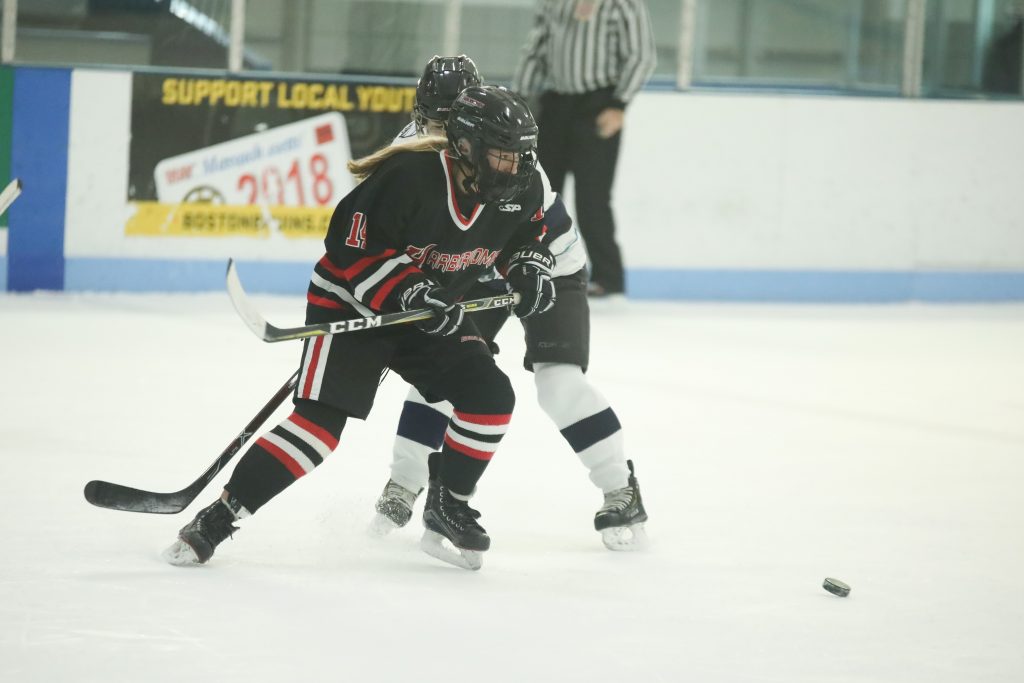 Sophomore defensemen Erin Packard fighting to clear the puck in the third period. 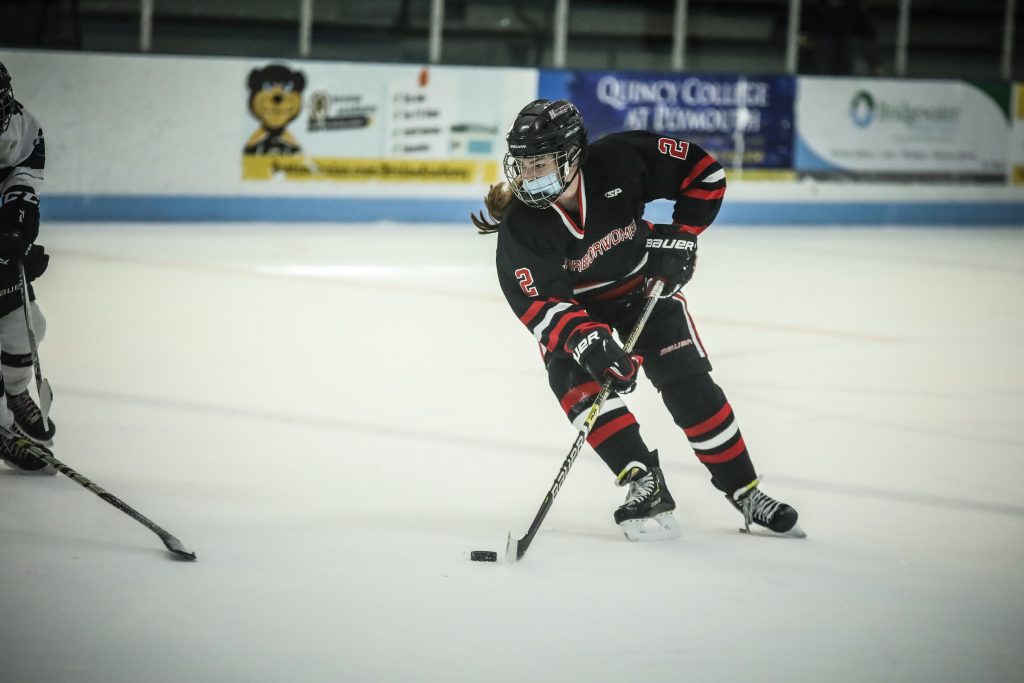 Junion Ryan Maguire had big game with a goal and 2 assists. 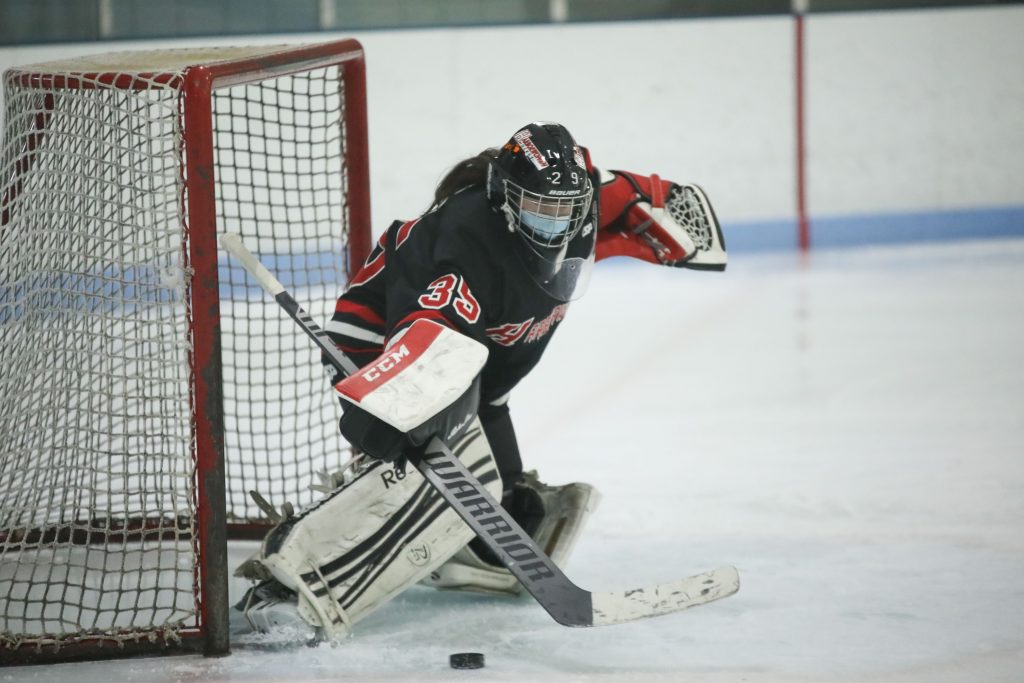 Maffei with a save in the third. 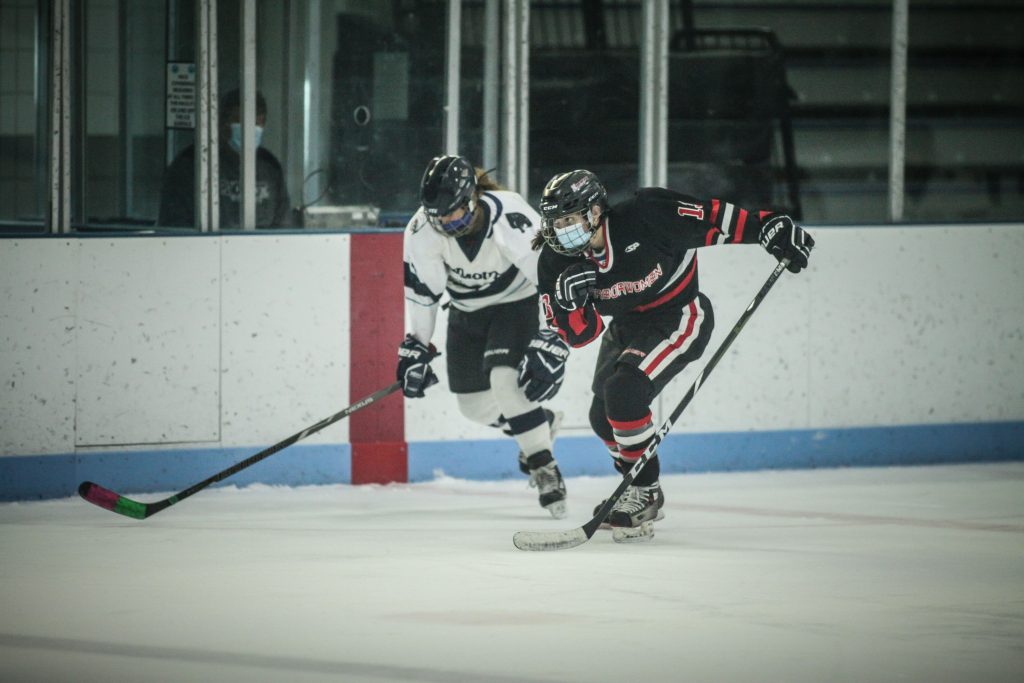