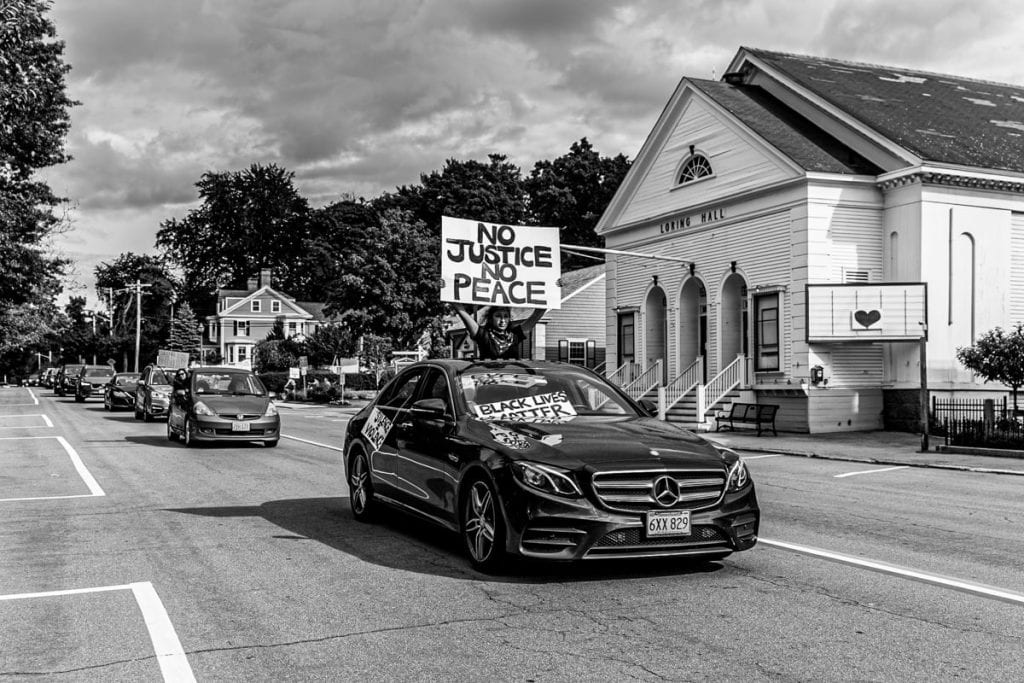 Rohini Gajaraj, holding a sign in the first car during the June 7 car caravan rally. Photo by Brooke Bartletta.

Those who plan to participate are asked to make signs either for passengers to hold up while traveling along the route or to place on their cars, to play music by black artists, and to honk their horns.

The first successful event in early June followed the Fourth of July parade route, with around 40 to 50 cars participating and some 100 residents standing outside their homes cheering, clapping, and holding Black Lives Matter signs.

"This was wonderful to see," according to event organizer Rohini Gajaraj, who grew up in Hingham and is a current resident.

The June 28 caravan -- from 3:30 to 5:30 p.m. -- will follow a different, more historical route through Tuttleville, a historically black village founded in Hingham more than 200 years ago. Lifelong Hingham resident and Police Chief Glenn Olsson suggested this route.

According to the Hingham Heritage Museum archives, James Tuttle married Rebecca Humphrey in Hingham and founded the small neighborhood of Tuttleville at the intersection of High and Ward Streets in the early 1800s. Its residents worked in Weymouth’s shoe factories and farmed.

"We are hoping for a good turnout," Gajaraj said. "It's very important for the Hingham community and others living in mostly-white suburbs to show their support. It's heartwarming to see little kids [and others] holding Black Lives Matter signs. It's important for parents to educate their kids and for them to learn that differences exist and that they should be celebrated."

As a person of color growing up in Hingham, Gajaraj said she experienced racism in elementary school. "The problem has to be acknowledged in order to [find solutions]," she said.

A community like Hingham coming together to support a cause can lead to productive, if sometimes difficult, conversations, Gajaraj said. "There's strength in numbers."

The June 28 caravan is for those who are immunocompromised, worried about social distancing, "and all people in Hingham and the surrounding area who want to show their support for this extremely important movement," Gajaraj said.

The caravan will gather at Hingham High School around 3:30 p.m., leaving at 4 p.m.

Participants are asked to remain inside their cars and to continue driving without stopping for the entire length of the route.