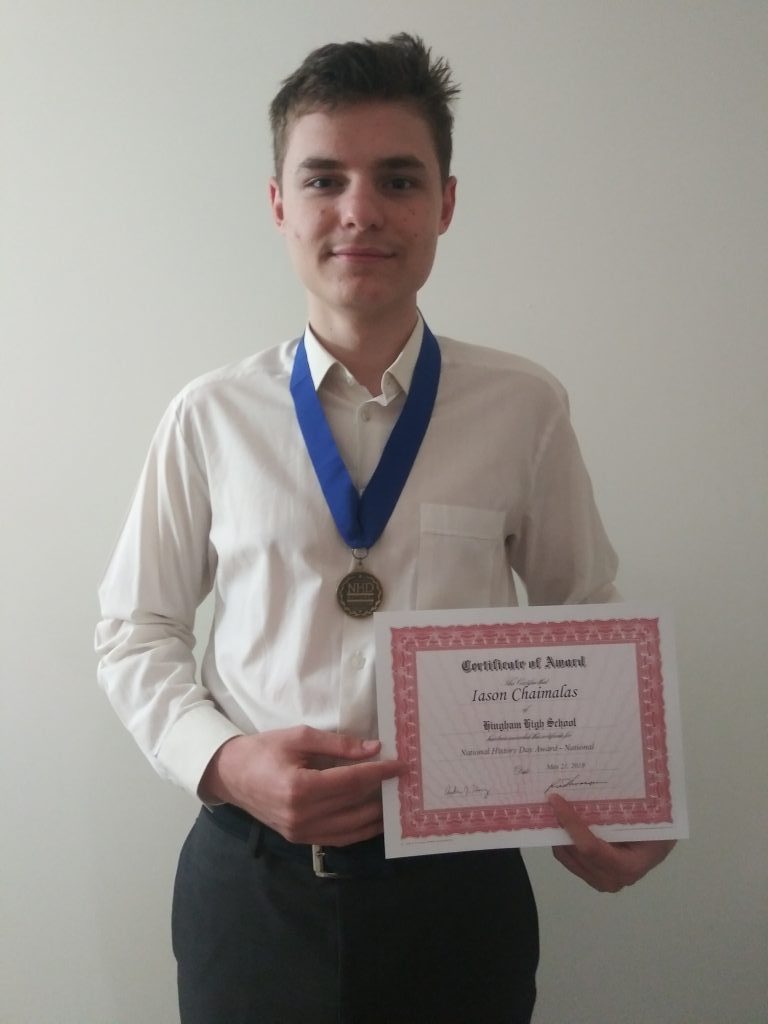 Hingham High School Junior Iason Chaimalas is excited about heading for the National History Day competition in Washington D.C. this coming weekend. This year's theme is "Triumph & Tragedy in History."

"The NHD competition is a big part of our social studies program for all HHS juniors," said Andy Hoey, Hingham Public Schools Director of Social Studies, K-12. "This is an outstanding accomplishment and is the academic equivalent of a sports team making it to the national level. What's more, this is the fourth year in a row that at least one HHS student has qualified."

This national competition will take place June 9 to 13 and is the final stage of a series of contests at the local and state/affiliate levels. "Students begin their journey by presenting their projects in classrooms, schools, and districts around the world," Hoey said. "The ones with the top entries are invited to the state/affiliate level contests." The top two entries in every category at that level are then invited to the national contest at the University of Maryland, College Park. Hoey, Iason, and the entire school are proud that his project has made it to this level for 2019 and also of the efforts of all students who completed projects and their teachers.

HHS's participation in the National History Day contest goes back decades, but two years ago the program was expanded to include all junior U.S. History students rather than just the Advanced Placement students as in the past.

Students conduct historical research for papers, websites, documentaries, displays, and performances -- whatever format they prefer on a topic in which they are personally interested.  With the exception of papers, students can work in pairs if they wish.

"Students enjoy learning about a topic of interest, and the project is an excellent culmination of their skills in research, source analysis, critical thinking, writing, and communication," Hoey said.  "The fact that our students perform so well in the regional, state, and national contests is a testament to the strength of our social studies curriculum.  The 11th-grade teachers put in a tremendous amount of work in supporting their students, but the credit is also shared by all of our teachers who, as early as the elementary grades, spark an interest and enthusiasm for history and develop the requisite historical thinking skills over the years."

Iason, whose teacher is Kathleen Dwyer, wrote an historical paper.  He and other HHS students participated in the National History Day competition at Massachusetts History Day this past April.

Topping off the honors at that event was Iason, who won first place in the Historical Paper category, as well as a special prize for “Best Project in Early American History.” "This outstanding achievement earned him a trip to the national competition," Hoey said.

Iason's paper is titled, "Colonial Encounters Between Puritans and Pequots: From Aggressive Diplomacy to Callous Genocide," which broadly examines the colonial encounters between the early English settlers and the Native American populations and delves deeply into the microcosm of the Pequot War in colonial New England.

"While this paper aims to identify the causes of the native destruction and the colonists' ascent to power, it also recognizes that while the Pequots were callously crushed, their determination and spirit were not. Like other native groups that escaped desolation, the Pequots triumphantly persevered and continue to champion awareness and justice," Iason said.

Iason's NHD paper began as a research project in his AP U.S.  History class, and at first he never expected to reach as far as he has. That's why he describes himself as thrilled and incredulous, especially when I received the 1st Place Senior Paper Award at the Mass. NHD Contest. Now, I am looking forward to the National Contest this coming weekend.  I am elated at the notion that I will be competing on such a grand stage."

Iason sums up the overall experience as "amazing and a great challenge. It has taught me a lot, particularly regarding scholarly research and academic writing. Moreover, I have greatly expanded my knowledge of colonial New England, and I have been able to link the historical developments I have analyzed to greater trends throughout American history," he said. "This is, after all, the ultimate lesson that the discipline of history offers, in my opinion."

Due to their excellent performance at the prior month’s district-level competition, HHS was also represented at the state competition by Ciara Dale, Sarah Falb, Ruthie Kerber, and Carly Price.

This year Hingham Historical Society was an "outstanding partner" in organizing an event to showcase participating students' work for the community.  HHS also provided several volunteers to serve as judges at the school-wide contest to decide which projects entered the initial, regional round of the competition.

Jane Shute and Paul Losordo were among the judges. Shute is active in HHS and gives tours of the Old Ordinary museum. Losordo is a HHS member with a great interest in history, with hundreds of history books in his own library.

"I thought the projects were wonderful," said Shute, who judged the 10-minute videos that were entered. She was impressed with the knowledge the students had gained about topics ranging from "mental health and race to gender discrimination and Ruth Bader Ginsberg" and also with their technical skills. "Basically, I am in favor of any program that highlights and promotes history. . . . It is my hope that programs like History Day will interest students in the history of our country and encourage them to participate in our politics."

Losordo also judged the video presentations and was impressed with the "sophistication of the subject matter and presentation of each production," with topics ranging from the shirtwaist factory fire in New York City back in the sweat shop era to a documentary on the Harlem Renaissance.

Losordo thinks that these types of competitions are important. "I certainly believe the study of social studies and history in particular is important," he said. "If today's kids don't have an historical perspective, they won't know how to evaluate some of the unusual occurrences that are taking place today, including the Trump phenomenon. So hats off to Andy Hoey and all those involved in the K-12 social studies and history program."

The following students also advanced to the national level in earlier years:

The theme for the NHD competition when Kyra participated was "Taking a Stand." She researched the life and work of Margaret Sanger, "who coined the term 'birth control,' opened up American's first birth control clinic in Brooklyn in 1916, and fought for the sexual rights and freedom for women," Kyra said.  The end result  was a 10-minute monologue called, "'We Shall': Musings of Margaret Sanger" from her point of view. The setting was Sanger's prison cell, where she sat awaiting her trial for 30 days in February 1917.

"I performed the monologue as Sanger with a generic costume and minimal props/set because the most important part of the piece was the script," Kyra said. "I didn't want to distract from Sanger's words and what we really see in the scene: a powerful -- but certainly not perfect -- woman struggling to combat institutional opposition."

Kyra was excited about moving on to subsequent competitions because they gave her more opportunities to share Sanger's story. "I have performed onstage my whole life, but getting to combine my passions for acting, feminism, and history was a huge gift," she said.

Kyra noted, "More than 100 years later, we are fighting for some of the same rights that Sanger and her colleagues fought for."

O'Connor, William's teacher (see above), praised all the students who participated, especially those who have made it to the nationals this and in past years: "Students invest so much into their work, and it's very gratifying to watch them learn and grow over the course of the project."