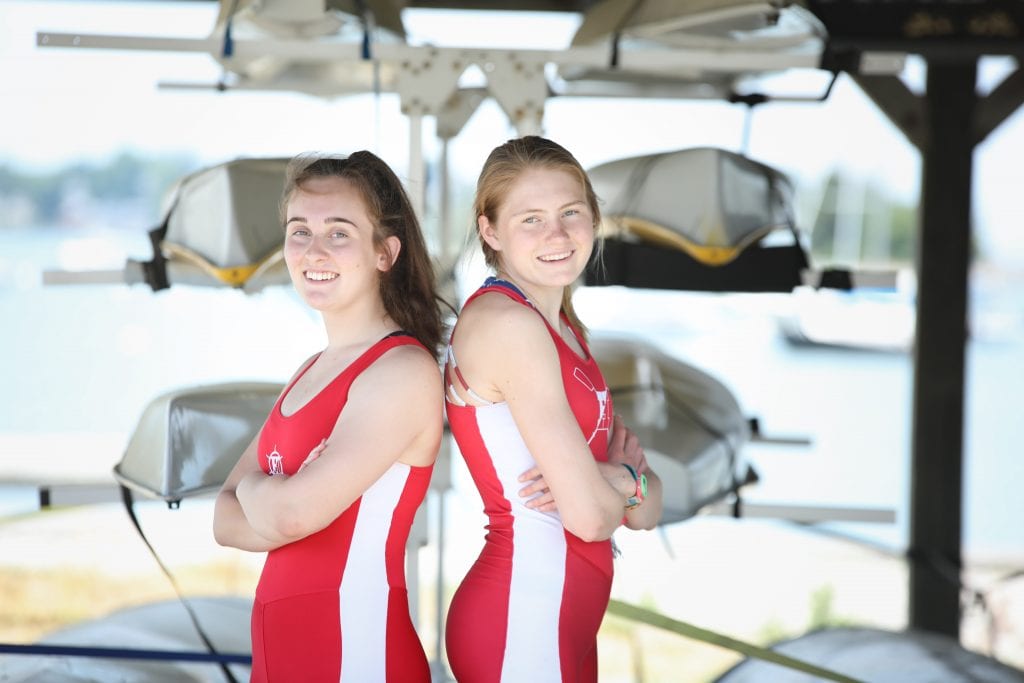 Some teens decide when they are stuck at home for three months to play marathon sessions of Fortnite or do Tik Tok videos all day long ... or decide to break world records, which is exactly what Devon Moriarty and Ella Niehoff did on June 6th-7th.  These two members of the Hingham High School Crew team sat in a garage and rowed 50 out of every 60 minutes for 34 hours straight while being cheered on by friends, family, and teammates.  They rowed a total of 217,534 meters (135 miles or the length of the Mass Pike from Boston to NY) and raised $750 for Water1st, a non-profit who helps communities supply water to homes, schools, and hospitals.

Anchor Sports caught up with Devon and Ella to find out all about their record-breaking event.

Tell us a little about yourselves.

Ella Niehoff: I am a rising junior at Hingham High School. I have been rowing since the spring of seventh grade. In the winter, I run varsity track. I strive to always push myself, and I love to work hard. A 34-hour erg felt like a perfect challenge for myself and I am grateful that Devon completed it with me.

Devon Moriarty: My name is Devon Moriarty, and I’m a rising junior at Hingham High School. I started recreational rowing at the Hingham Maritime Center in seventh grade and have been on the HHS crew team since fall freshman year. I did crew all seasons this year, and I am a part of the clubs GLI (Girls Learn International) and ROC (Reaching Out to Children). I also take a lot of art courses and love to draw and paint in my free time.

What record did you break?

The record we broke was the Longest Continual Row for our age and weight category (female, under 19 years old, lightweight). The previous record was 31 hours and stood from 2016 until we beat it. The rules for beating the record were that you had to be on the erg (rowing machine) rowing for at least 50 minutes of every hour (this gave us time for bathroom breaks).

What made you decide to go for the World Record?

EN: I found the record for Individual Longest Continual Row, and it was only 7 hours higher than 24 hours. So I decided, why not just break the record, I was going to erg 24 hours anyway. Devon expressed her interest in joining me, and we completed the piece together.

Every hour we were allowed a ten-minute break, where we drank water. Also, sometimes we used the bathroom and ate food.

This spring, we had a virtual crew season. We brought ergs home and exercised together via zoom.

From the beginning of this season, I was interested in erging for 24 hours. My inspiration came from hearing about a Hingham High Crew alumni who erged for 24 hours. However, I got a concussion and it lasted for over a month. So my plan to erg 24 hours was delayed.

In the meantime, some of my other teammates were interested in erging for 24 hours. Helena Orth attempted the 24 hour erg and Cassandra completed the erg while raising over $1,000 for Minneapolis. My coach, Marika Kopp, also completed 24 hours of erging while maintaining an insanely low split. Some other of my teammates completed tandem ergs, where each person would take shifts of the erg piece and erg for a total of twelve hours.

I had joked about making a competition who could stay on the erg for the longest time between the Hingham High Crew team. While looking at Concept2 records, I found that there was a longest continual row record. The longest ever is four days four hours and 30 minutes by Benjamin Ajayi-Obe from the UK. The record for 19 and under lightweight was only 31 hours. Definitely doable. We broke the record by three hours more than the previous.

DM: Ella had mentioned doing a 24-hour erg challenge at the beginning of the season, but we hadn’t really done much else about it because she got a concussion so couldn’t participate in one. However, towards the end of the season our teammate Helena Orth attempted to do a 24-hour erg challenge and made it to 14 1/2 hours. That kind of set off a chain reaction. Sisters, Claire and Teagan Schnorr finished a tandem 24-hour erg challenge (taking turns erging throughout the 24 hours). Then Cassandra Dasco finished an individual 24 hour erg challenge followed by our amazing coach Marika Kopp who also completed an individual 24 hour erg challenge. Then two coxswains on the team, Kerry McAuley and Katelyn Murray, completed a tandem 24 hour erg challenge as well, also raising money for the Loveland Foundation. The amazing dedication and motivation of my coach and teammates inspired me to attempt a 24-hour erg challenge as well. Knowing that Ella had been interested in it, I texted her asking about it and when she was cleared from her concussion so she could do one. She had recently been cleared and planned on doing one herself, and rather than erging 24 hours, she wanted to break the World Record because we figured that 31 wasn’t that much more than 24, and we might as well go for it. We were also fortunate to have advice from the other girls that had erged for such a long time- Marika especially gave us a lot of very helpful tips.

What was the most difficult part of the challenge, and did you ever think of stopping?

EN: The most difficult part of the challenge was probably when we felt groggy and tired. It was not terrible, just annoying. From about 7-10 am Devon was out of it, and her body begged to leave the erg. While from 5-7 am, I sat erging silently and wanted to sleep. There was never a point we were going to stop. Not even once did I contemplate getting off the erg. If Devon even tried, I would force her to get back on immediately.

DM: In my opinion, the most difficult parts of the challenge were finding things to distract me enough to get me to the next break and continuing to erg despite pains. To get through it, I found that talking to people and singing to music with Ella and the other people around us helped most with passing the time.  I didn’t ever really consider stopping throughout the piece because I knew how much I would regret it, and I didn’t want to let myself, Ella, my team, and my family and friends down. At certain points I had bad back, knee, and ankle pains which made it significantly harder to push through. However, I found that ice, stretching, and IcyHot really helped with the pain and at points made it go away completely. The points where I had the worst rough patches were between 10:00 pm - 11:00 pm and 7:00 am - 10:00 am.

What was the support like while you were rowing and when you finished?

DM: Throughout the 34 hours I would say at least 90% of the time we had at least one person with us. My brother Cullen actually stayed awake with us until 4:30 am, which I am so thankful for. Undoubtedly without the outstanding support of our team, family, and friends, I’m not sure if I would have made it through because they were so motivating and very helpful with distracting us while we were erging. Honestly, the first seven hours only felt like three because I was having so much fun talking with our visitors. Our coach Marika actually visited us four times over the 34 hours and she lives half an hour away so that really meant a lot to me and proves how much she cares for us. When we hit 32 hours, breaking the record, we were super excited but we had actually decided on doing 34 hours because we wanted to make our record harder to beat. When we finished our 34 hours, we had so many people supporting us and I cannot express how appreciative I am to be surrounded by such fantastic, encouraging people. Ella and I sprinted for the last two minutes and everyone was screaming so loud it all just blurred into one high pitched sound. Finally finishing and seeing everyone so excited was one of the best feelings I’ve ever felt.

EN: Our teammates cheering us on was the absolute best! They made the time fly by and allowed us to see how much support our team has for each other. I can’t explain how happy I felt to have many members of my team present. They’re the best, and I was glad to see them again, after not having a spring season. Many of them were at Devon’s house while we finished. Although unnecessary, we sprinted at the end for show and to get everybody hyped up.

Do you think you will try and break your own record?

EN: I don’t plan to break our own record because I want to hold it with Devon. However, I am interested in completing a million meter erg piece. Not sure if I will do that yet because it will take about two weeks. (Erg for the day, sleep at night, repeat).

DM: I don’t think that I will try to beat my own record because Ella and I specifically timed our erg monitors to be exactly the same time so we could both hold the record. Sharing that record with Ella is something that I will appreciate for the rest of my life. Also, I am normally very busy and I would prefer to focus on school and the challenges we face during the normal crew season. If we had had a typical spring season, I don’t think I would have attempted this challenge, so in a way it’s nice to think that something exciting like this came out of not being able to go to school or sports.