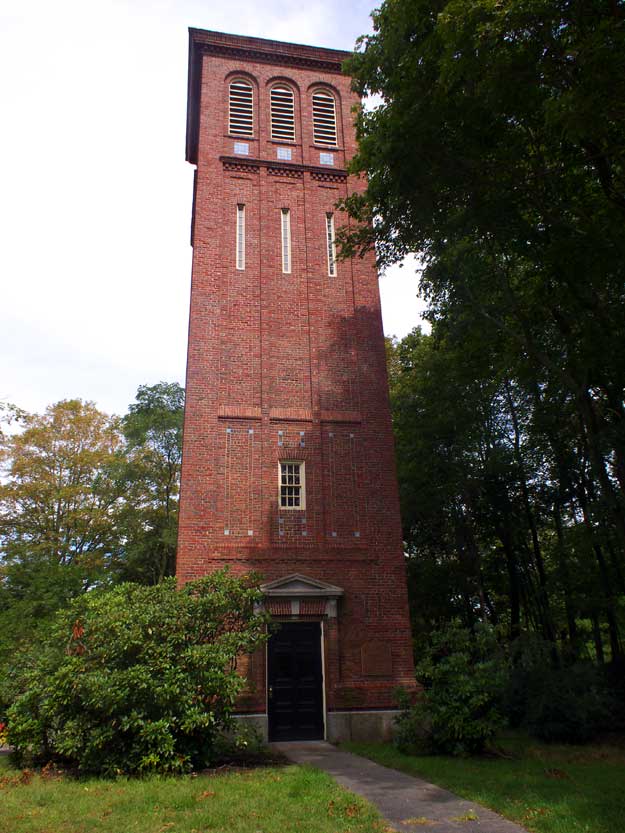 To celebrate the 275th anniversary of the founding of Hingham, MA , the residents here decided to erect a Memorial Tower near the Old Ship Church. As a tribute to our old Hingham heritage, it was decided that a stone from old Hingham should be delivered to Hingham, MA to be used as the cornerstone of the new tower. Unfortunately, when the Massachusetts Hinghamites arrived in old Hingham to select a stone, they could not find one larger than a hand. Since a small stone would obviously be unsuitable as a cornerstone, the rector of St. Andrews Church in old Hingham suggested that we use the corner stone from their butcher's shop as that was the only large stone to be found in old Hingham. Since that was the only suitable option, the corner stone was removed from the butcher shop and shipped to America to be the cornerstone of our new monument.

Even with best-laid plans, the stone's shape prevented it from being used as the corner stone, so it was placed inside the tower with the following inscription.

The Hingham Stone
long used as a mounting block
is believed to have stood
for centuries on the Village Green
and to‘ have been known
to the Forefathers before the migration.
It was given by Hingham, Norfolk
to Hingham, Massachusetts
for this Memorial
and was presented to the Town
on October 9, 1911 by the
Right Hon. James Bryce, D.C.l_.
Ambassador for Great Britain
to the United States. 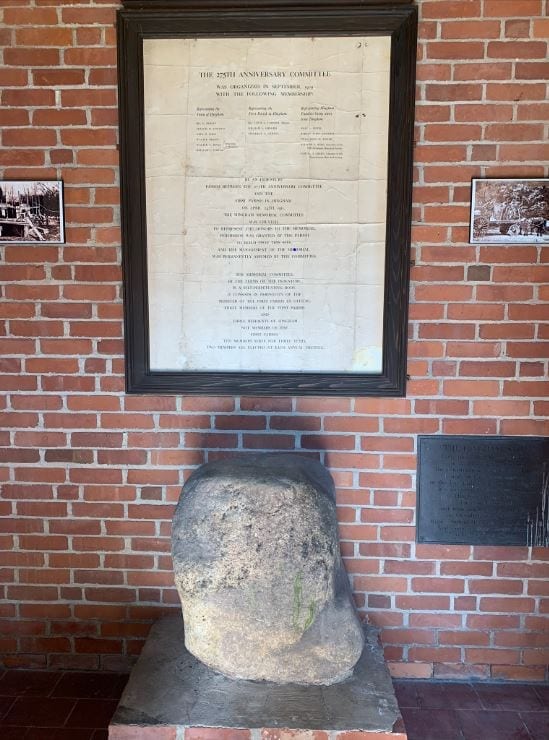 Anyone who has ever tried to dig in their garden knows that Hingham, MA, in contrast to old Hingham, is FULL of stones. Large stones are abundant here, so when town meeting voted unanimously to send a stone to old Hingham, they had plenty to chose from.

According to Hingham History Centre, "The stone, a 2-ton block of granite, arrived in old Hingham in 1913 and was temporarily left on the green near the position of the present bus shelter. It became a source of amusement for the local children who had many games round it." 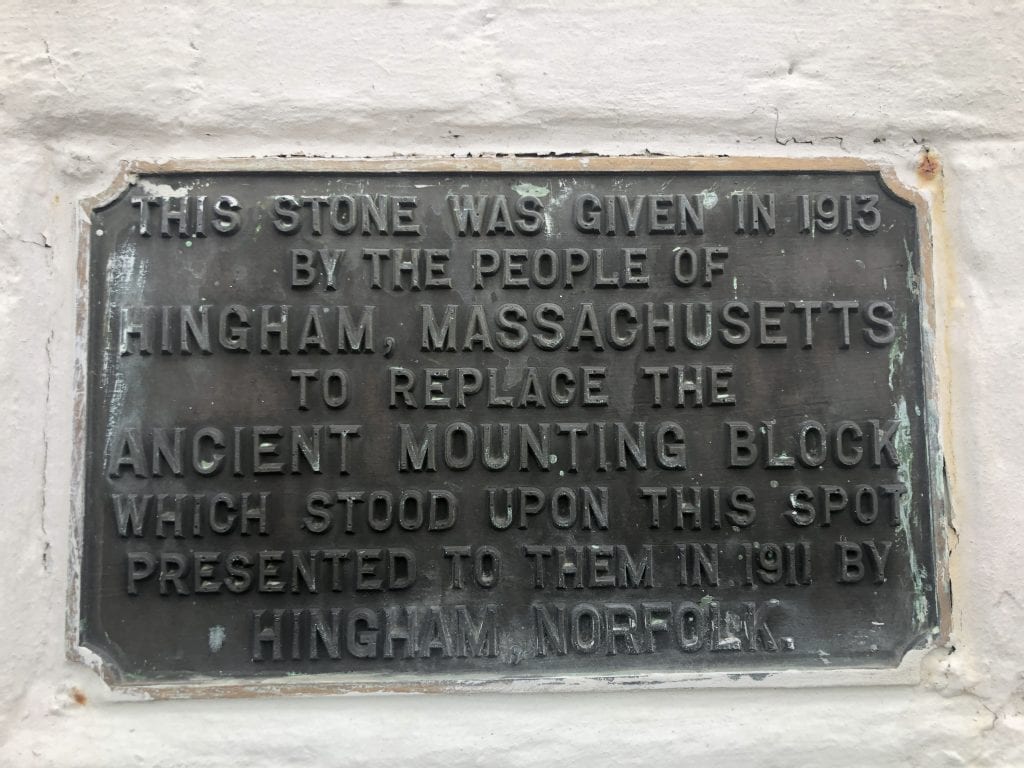 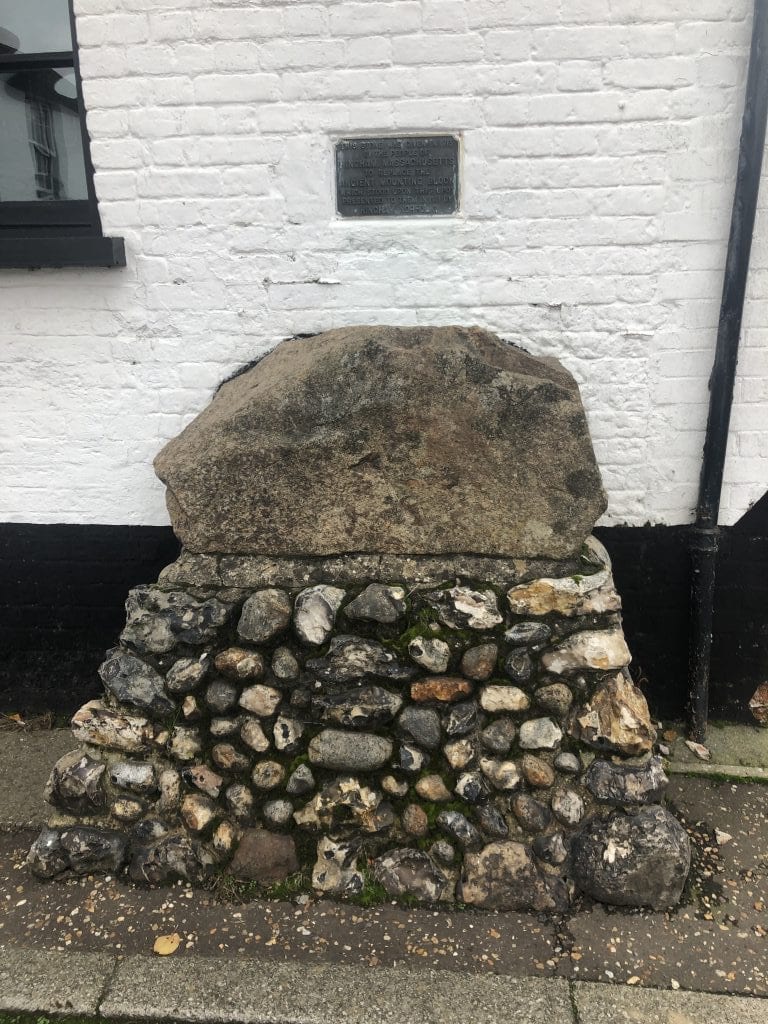 The presentation ceremony was described as follows:

“At present the stone is a rough boulder, but the expressed wish of our American cousins is that it shall be inscribed, and, if possible, replace the old stone.  It was the formal presentation of this stone that occupied the attention of Old Hingham on Monday. The bells in the church tower rang out a merry peal, the Attleborough Town Band was in attendance and played English and American airs. Boy Scouts and members of the Church Lads‘ Brigade were also present, and from every position of vantage flags and bunting were displayed. The ceremony was performed on the open space in front of the Post Office. The centre of attraction, of course, was the stone, placed upon a lorry draped with blue muslin. Overhead the Stars and Stripes and the Union Jack waved side by side in the breeze, and connecting them were the white-lettered mottoes, on a red background; ‘Old Hingham shakes hands with New Hingham, and ‘1637 – Welcome -1913’ ”