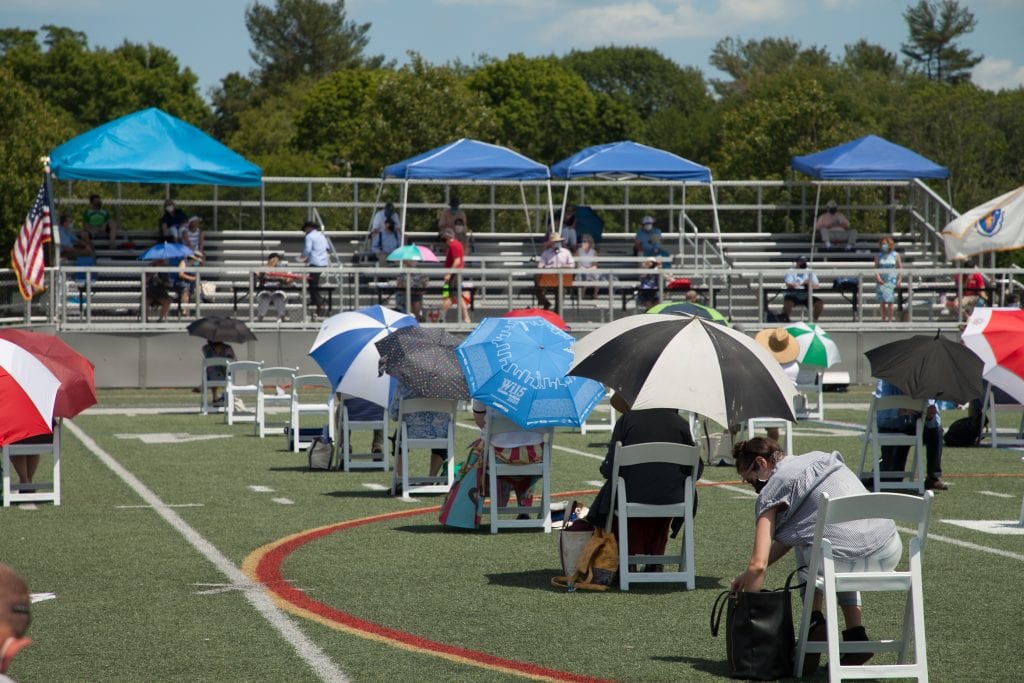 It was a Town Meeting like no other, with chairs set up 10 feet apart and voters wearing face masks in the scorching heat as the three-hour meeting unfolded on the high school multi-purpose field.

As the crowd gathered before the meeting began, friends and acquaintances waved to each other from a distance. Some sat under canopies that shielded them from the hot sun.

Occasionally a few clouds overhead and a slight breeze provided momentary relief from the heat, with one voter using a thermometer to gauge the temperature at one point registering 111 degrees on the field. Thankfully, there were no reported medical issues.

With a total of 392 attendees, the recently-lowered 200 quorum was reached in time to start the meeting at 2 p.m. The usual quorum is 300, but was reduced for this Town Meeting only because of the unusual circumstances related to COVID-19.

Voters were in a "yes" mood, supporting all 38 warrant articles, as they shielded themselves with hats, sunscreen, and umbrellas.

Voters supported a $126.5 million town budget, including $58 million for the schools,  as well as funds for two feasibility studies -- one for a proposed new public safety facility on Lincoln Street and the other for additional funds for a Foster School feasibility study related to possible partial reimbursement from the Massachusetts School Building Authority for major renovations or a new school.

Also approved were funds related to site design for renovations to the senior center and the space currently occupied by the police department.

While all of the warrants moved forward, Town Meeting did include many discussions and clarifications, specifically regarding the Police budget, the school budget,  as well as CPC funding for the South Shore Country Club pool and the Benjamin Lincoln House, among others.

Voters also approved allocating up to $2.7 million to pay for the cost of designing, engineering, constructing, repairing, and improving the Weir River Water System (the new name once the transition from Aquarion to town ownership is complete around July 31).

Funding was also approved for an independent review of existing municipal and school facilities and for the design and construction of a new South Shore Country Club maintenance facility, with the Club responsible for the total cost of the building, paid for with golf revenues.

Two citizens' petitions also gained voter support related to the proposed expansion of Hingham Cemetery off South Street and creation of a tree preservation by-law committee to review the current by-laws to encourage the preservation of trees on private property where significant demolition or construction is occurring.

The meeting adjourned at about 5 p.m., in keeping with the selectmen's promise to conduct business as efficiently as possible.  At the conclusion of the meeting, Moderator Michael Puzo asked Karen Johnson, Selectman chair who is not seeking reelection, to make a motion to adjourn the meeting, to which residents enthusiastically and unanimously responded “aye.”

1 thought on “Nearly 400 voters turned out for Town Meeting, despite the heat wave”