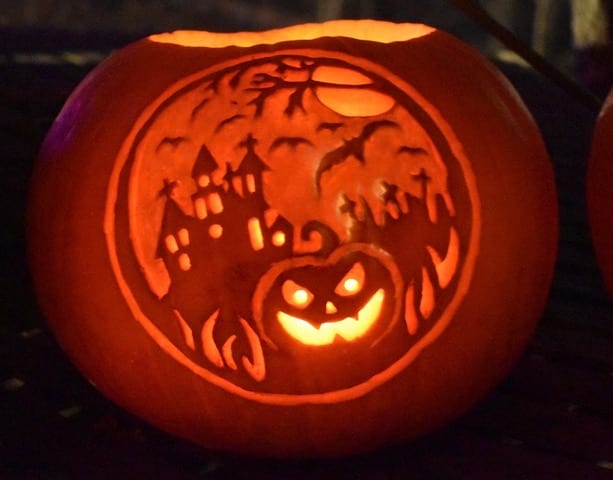 One of the ingeniously designed jack-o-lanterns headed for the trail display at the New England Wildlife Center.

Just as Salem's witchcraft history builds the Halloween spirit on the North Shore, Weymouth's New England Wildlife Center has thrilled kids with its “Night of a Thousand Faces” for 18 years. It’s a tradition spawned in NEWC’s original Hingham home, before the Center relocated to the neighboring town years ago.

But with the Covid-19 pandemic throwing a real-life scare into South Shore families in 2020, the Weymouth venue is turning its formerly live late-October program into an exciting online haunting for kids. This Friday and Saturday at 8 p.m. (Oct. 23-24), the Wildlife Center will be staging a novel, live-streamed video drama along a jack-o-lantern-lined stretch of its Andrea McKenna Harris Wetland and Nature Trail.

The colorful adventure, dubbed “The Owl and the Pumpkin,” is being offered free to online viewers, with the idea not only of exciting South Shore youngsters, but also of encouraging donations to NEWC to help make up for this year’s Covid-related lost revenues.

With its “thousand faces” reduced to about 500—the number of pumpkins contributed this year by sponsors, to be carved for the most part by volunteers instead of local youths—the trail will serve as the staging area for a wild adventure tale that features the theft of a prized pumpkin by giant owl creatures on motorbikes. The crime will be solved amid pumpkin-pie throwing, bike crashes, and the involvement of snakes and other scary creatures—this being a wildlife haven, after all. Helping solve the pumpkin theft are two good-guy avian residents at the Center: its screech owl, Loki, and its great horned owl, Thor.

This Hingham-based writer is particularly happy that the trail is once again the scene of Halloween fun. The trail was named for my late wife Andrea, a lover of the October holiday, who was one of the Center’s major supporters in the days when it was based near Hingham’s Bare Cove Park. Andrea was only 48 when she died of a brain tumor in 1998. A nature trail had been one of her great ideas, although she couldn’t have imagined the elaborate, nearly-half-mile-long teaching path that NEWC’s director, Dr. Greg Mertz, created to wind behind today’s high-tech animal center and clinic at 500 Columbian St. in Weymouth.

Involved with this week's Halloween excitement is Dr. Mertz’s son, Zak, along with famed naturalist Jeff Corwin. “Last year there were something like 4,000 people involved,” carving pumpkins and conducting a live Halloween trail program, says Zak, who heads NEWC’s affiliated Birdsey Cape Wildlife Center in Barnstable. “This year it evolved into something that would make things fun and engaging for people watching from home.” Unfolding live on Friday night—and taped for rebroadcast the next night—will be the mystery of “a prize pumpkin that is stolen by a gang of giant owls on motorbikes.” Corwin, perhaps best known now for hosting television nature shows, got his start as an intern with New England Wildlife Center years ago in Hingham.

If all goes well for the Wildlife Center, donations will help make up for the financial losses NEWC might otherwise have experienced from the absence of what is normally the year's biggest fundraising program. It brought in $6,000 for NEWC in 2019. The Center currently is halfway to achieving overall donations under a $300,000 matching grant, so any “Night of a Thousand Faces” donations will go twice as far in 2020.

I know that happy result for the New England Wildlife Center—along with such an exciting use of the trail named for her—would’ve made Andrea very happy.

Roy Harris, a semi-retired newspaper reporter and author, lives in the World’s End area of Hingham.