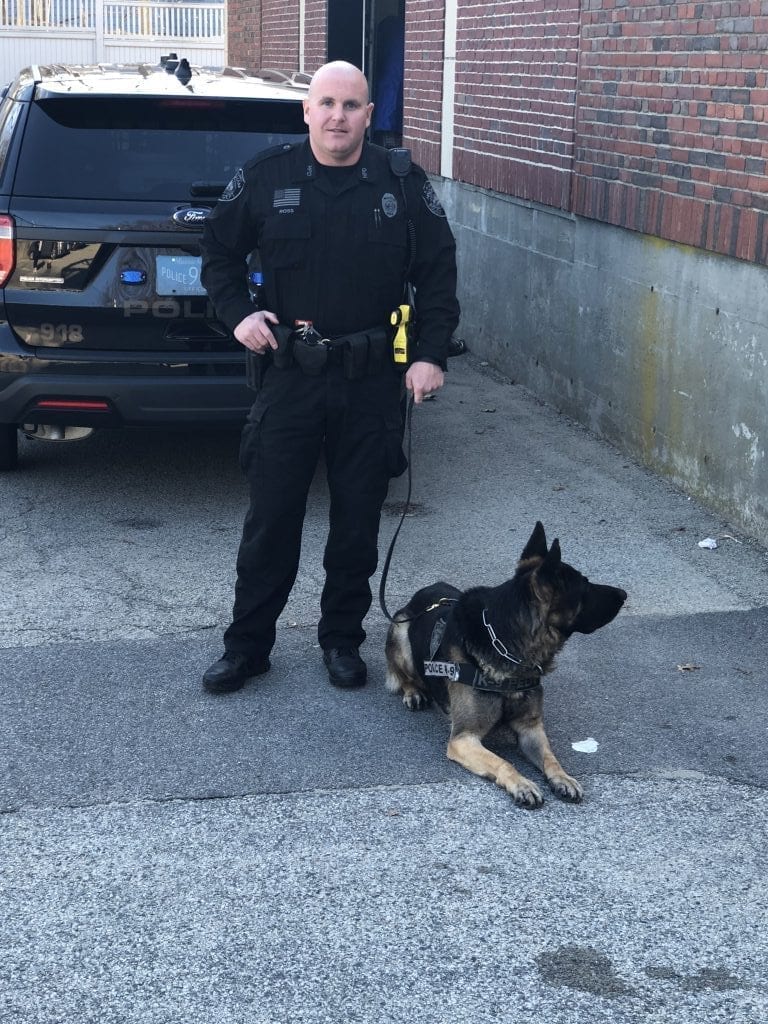 Officer Ross is 31 years old, originally from the South Shore and currently lives in Pembroke.  After graduating from Endicott College in 2009 with a Bachelor’s degree in criminal justice, he started working for the Hingham Police Department and currently serves in the K-9 unit with his four-legged partner, Pedy.   Prior to that, Officer Ross worked for the Hull Police Department as a seasonal police officer and a special for three years. Since coming onto the department, he has worked in the traffic division and served on the honor guard. When Officer Ross is not working, he enjoys going to the gym, taking Pedy on hikes and spending time with his girlfriend, Colleen.

Pedy is a German Shepherd from Czechoslovakia and will turn 4 in March. He was selected for Officer Ross at Connecticut Canine Services in Bethany, Connecticut.

What inspired you to become a K-9 officer?

K-9 is always something that I was interested in. When I got on the department in 2010, I remember seeing Officer Foss working with his partner Axel. I was intrigued by their bond and their ability to locate both good and bad people. I also have other friends in K-9 who also added to my interest. I grew up with several large dogs, including a German Shepherd mix.

What type of work is your dog trained to perform?

K-9 Pedy is a patrol dog trained in tracking missing and/or endangered people, suspects of crimes and apprehension work. He is also trained in locating evidence.

Does your dog have a party trick?

Pedy isn’t shy to hop on the dance floor.

What is your dog’s biggest motivator?

Food. Pedy is a food reward dog, so he works to eat every day.

Does your dog have any annoying habits or quirks?

I wouldn’t say that anything Pedy does is annoying, however, he barks when dispatch calls, “918,” over the radio, that can be a little hard on the ears, especially on a double.

I appreciate the town’s continued support of the police department, especially our K-9 unit.

What is your favorite place to walk your dog in Hingham?

Pedy and I generally don’t come to Hingham unless we are working, but by my house there are expired cranberry bogs that we enjoy walking.

Who is it easier to work with, humans or animals?

Pedy is the best partner in the world because he doesn’t talk back!

I personally think I have the best job in the world, and I wouldn’t trade it for anything.

What’s one thing people may not know about you?

I played football in college and coached high school football for three years after graduation.

The Anchor encourages you to support this important community resource.

The Hingham Police K9 Unit is funded mainly by donations. Donated funds are used to buy everything needed for the dogs' daily life such as food, treats, cages, kennels, and leashes, as well as to equip the two specialty cruisers needed for the dogs to be on patrol. Donations also help to defray any medical costs incurred for the two dogs.

Donations can be made online or by mailing a check to the address listed, or in person at the Hingham Police Station.

Donations can be sent through the mail to:
Hingham Police K9 Fund
212 Central Street
Hingham, Ma 02043