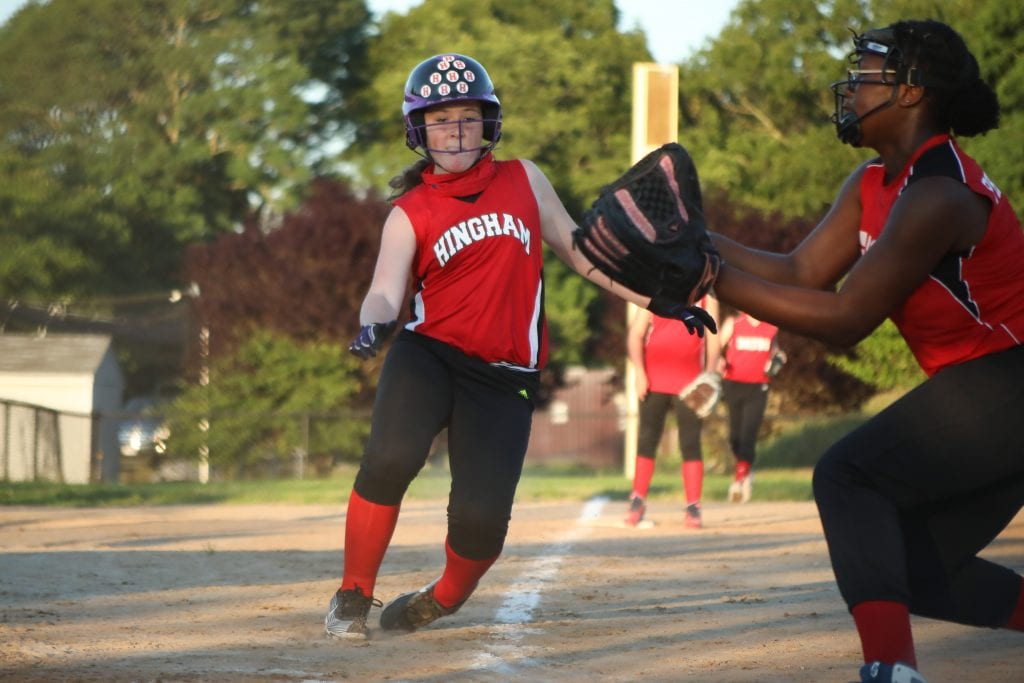 It's been almost 4 months since Hingham has seen a youth sporting event played on it's fields, rinks, and courts. That ended last night when Hingham Girls Softball, Hingham Little League, and Hingham/Hull Babe Ruth finally started their much awaited seasons.  Months of waiting, planning and coordinating finally paid off as the fields of Hingham were full of ball players once again.

"The girls are very excited to be out on the fields and playing softball and enjoying time with their friends." say HGS President Pam Desmarais.   As eager as everyone is to get back on the field, there has been some challenges for HGS.  "We are playing our spring and summer seasons at the same time!" Desmarais explains. "So there is a crunch on coaches, time availability of players due to overlaps of games on the same days at times and vacations, and availability of fields. Some coaches and girls will participate in 2 teams."

Things are a little different for the newly re-organzied Hingham/Hull Babe Ruth league.  New President Marc Swirbalus, who took over this year for long time President Elliot Sherman, describes how the delay has impacted them that much. "We are a new organization with a new attitude, so we don’t see any difference (from last year) because this is our first season." The plan if for a full 12 game season with playoffs in August and the championship game under the lights in one of the neighboring town's fields.  The league has also decided to reduce the maximum age from 16 to 15 years old in order to attract the younger players who might be hesitant about playing with older high school kids."  Swirbalus gives credit to the new board members, coaches, and volunteers helping to get the league ready for a brand new start.

Normally with over 700 players and 60+ teams, Hingham Little League was affected the most by the delayed start and new restrictions placed on youth sports leagues.  The sheer volume of players and teams required HLL to make some tough decisions in order to start up again. "We concluded we simply could not implement the safety protocols necessary for players ages 5-8yrs old." explains second year HLL President Jonathan Cignetti.  "There are only 2 divisions - MAJORS and AAA  - 10 Majors teams, 8 AAA teams.  No kid umpire program this year.  We are using only 1-single adult umpire and umpire will be behind (the) pitcher, not (the) catcher."  Because T-Ball and AA were excluded this year, the challenge was refunding the fees for 500 players on a system that's not set up for giving refunds.

Over 400 kids are signed up to play baseball or softball this summer during a time when not many other sports are allowed to play games, especially the indoor sports.  The governor announced just yesterday that outdoor sports are not allowed to have tournaments yet.  This affects HGS older teams who were scheduled for a few tournaments in the next week or so.  Even without the tournaments, most teams, across all the leagues, will be playing at least 2 games a week.

Safety still remains the leagues' top priority.  The new procedures are very noticeable on the fields, such as umpires will now stand behind the pitchers, there will be no sharing of equipment, and players are to stand outside the dugout when not on the field.  HLL has taken it a step further with detailed check lists for coaches and players to follow before, during, and after the game.  "We believe our safety plan one of the most comprehensive in the state." says Cignetti.   Details on their plan can be found on the HLL website.

With months of having the kids cooped up the in the house, parents are eager to have them back on the field.  Crystal Sullivan, parent of 3 HGS players, is one of those people.  "Honestly I’m thrilled the girls are back out there. At one point, I wasn’t sure we’d see any ball this year so it feels amazing," she says.  When asked about the issue of safety with her girls, ages 14, 13, and 9 playing on 3 different teams, she responded  "I feel confident that HGS is taking every precaution to keep all players and coaching staff safe and following the rigid guidelines set forth by the governor. As a parent, seeing the kids back on the field playing, having fun and reuniting with their teammates brings me immense joy and gives me a sense of normalcy that I think we were all craving!!"

The players are just as excited to get out on the field as well.  "It feels good to be back on the diamond," says rising Sophomore Connor Daly. "I have always had a connection to baseball and to finally be back feels amazing."  Fellow 10th graders are feeling a little more pressure this year with the elimination of spring sports.  Daly and his teammates never got to start their High School baseball careers playing  together on a designated freshman team. "Although it was extremely tough missing my freshman season, I think Babe Ruth is a good substitute.  Mr. Swirbalus and the other dads did an awesome job with fixing the program - they made summer ball in Hingham fun again."