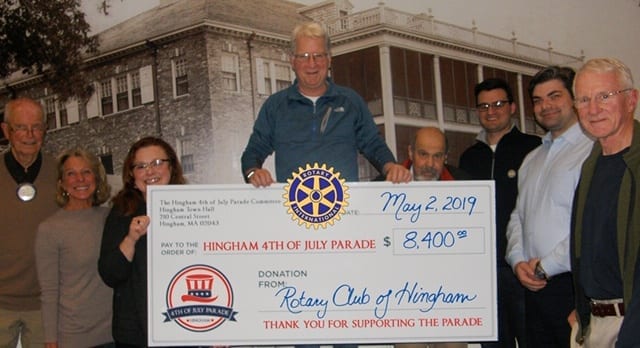 The Rotary Club has driven the Parade Button effort for many years and members say they are proud to continue to champion the Parade tradition in Hingham. The Parade, which is funded solely through private donations, costs roughly $40,000 each year, and relies heavily on the generosity of donor giving through Parade Buttons.

Dewitt DeLawter, a.k.a. “The Button Man,” is a Rotarian and member of the 4thof July Parade Committee, who has led the Rotary’s Parade Button efforts over the past several years.  In response to 2018’s record-breaking contribution, Dewitt responded, “You mean I [now] have another record to beat?!”

Parade Buttons hold memories for Parade goers and some people have Button sets going back into the 1990’s. “They are collectibles,” said Ms. Kennedy.

This year’s Parade Theme is “Celebrate Hingham’s Natural Beauty” and is depicted in the 2019 Button design featuring Hingham Harbor and World’s End. Parade Buttons are now available at many businesses in downtown Hingham and Hingham Centre locations.