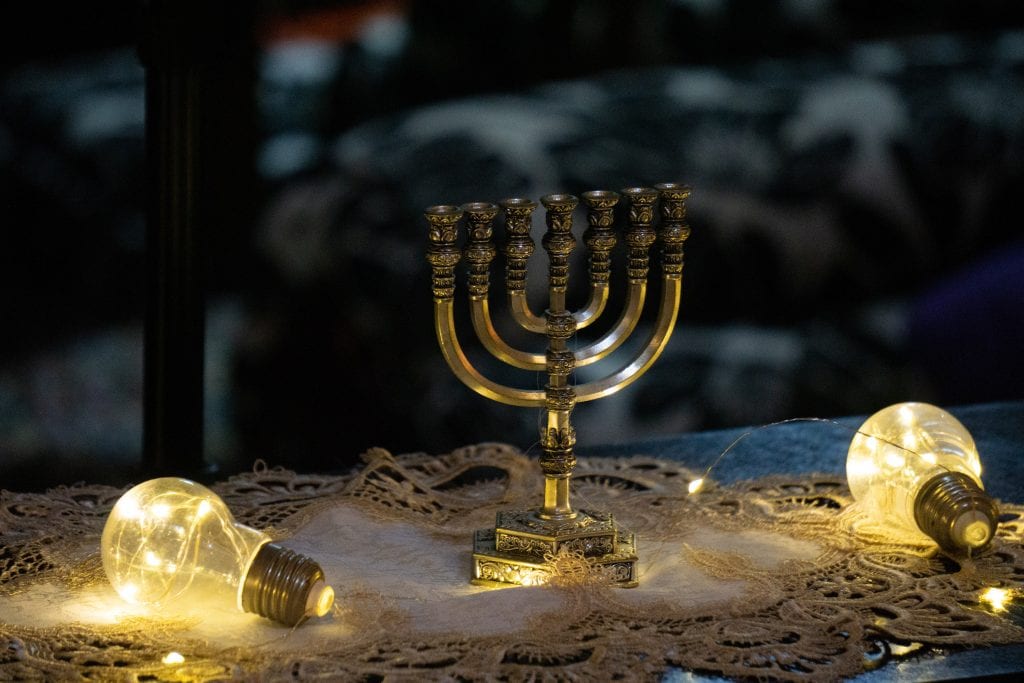 Here’s a story for you.

Once upon a time, a long, long time ago – 2200 years ago, in fact – there lived an evil, tyrannical king who ruled over the province of Judea.

He had such a high opinion of himself that he even gave himself the title of “God-manifest.” (Any similarities to leaders today with delusions of grandeur are clearly coincidental.)

Of course, he had a thing against the Jews. After all, Jews dared to practice their own religion, which went against his mandate that everyone renounce their own customs to observe only Greek culture and religion. For Jews, this meant keeping Shabbat or even something as seemingly innocuous as possessing a Bible meant certain death. (I’ll spare you the story of the two Jewish mothers who had their newborn sons secretly circumcised. Let’s just say it didn’t end well for any of them, babies included.)

But in the face of this pogrom, where Jews were forced to worship Greek gods, sacrifice pigs in the Temple and witness their fellow Jews being harassed, assaulted and killed – one man stood up against the tide.

As you’ve probably guessed by now that man was Mattathias, the priest, and father of the five Maccabee brothers. And this, of course, is the story of Hanukkah.

But this isn’t really the story of the Hanukah that we celebrate today – or rather, the “Chrismakah” that it has become. Don’t get me wrong: I’m no Grinch who stole Hanukah, because truth be told, I rather like this time of year. In fact, we’re that family with the goofy blow up Hanukah decorations in our front yard, including my favorite: a bear wearing a kippah holding a menorah. But I point this out because it’s rather ironic how far Hanukah has strayed from its roots.

True, we celebrate the miracle of the tiny cruse of oil that burned candles in the menorah for eight days instead of one when the Maccabees finally reclaimed the Temple (which is how we got the name “Hanukah,” meaning dedication) – but we’ve forgotten what the Maccabees fought for in the first place.

As Professor Jonathan Sarna in his book “A Time to Every Purpose” put it:
“…treating Hanukkah as if it were the ‘Jewish Christmas’ was something of a fraud. Hanukkah, after all, celebrates those who resisted pressures to conform religiously and culturally. It is, in a sense the holiday of anti-assimilation. It promotes the right to be different. Far from being the Jewish Christmas, Hanukkah should really be celebrated as the Jewish anti-Christmas.”

Sarna goes on to say that Mattathias’s declaration of his allegiance to Jewish practice and revolt against oppression is “a testament to religious liberty and minority group rights.”

In other words, the whole story of the Maccabees is about preserving what we now call multiculturalism. It is about defending all citizens’ rights to live, practice and celebrate in their own distinctive way.

And if you think about it, we wouldn’t even have Christmas if it hadn’t been for the Maccabees because what they did was preserve not only Judaism but monotheism, and without monotheism it’s harder to see how Christianity or even Islam would later develop. In this way, Matthathias’ revolt and ultimate victory not only preserved our religion but also changed the course of history.

That said, we cannot delve into the story of Hanukah without exposing its ugly underbelly. To begin with, evidence suggests that it was Hellenized Jews who ratted out their fellow Jews to King Antiochus in the first place, fanning his ire. I’m no psychologist but it seems it wasn’t enough for them to enjoy their Greek names and naked rugby games. For them to feel better about themselves they had to make sure that all Jews also gave up their Jewish ways. We have a name for this, it’s called sinat chinam, senseless hatred, and the rabbis have said that it is because of this kind of hatred that the Temple was destroyed.

Sadly, if you follow the Maccabee story to its end it is a tale of oppression, civil war and much senseless hatred, the low point being a descendant of the Maccabees who murdered 800 Pharisees (Jews) after first forcing them to watch their wives and children being slaughtered, all the while hosting a raucous, alcohol-infused Greek party. And in the end, the Romans once again occupied Jerusalem. As Joseph Telushkin writes in “Jewish Literacy,” “The tragedy was now complete. The original Maccabes had freed the Jews from foreign rule; their corrupt descendants now returned the Jews to subjugation under an alien (and pagan) power. The Maccabees had themselves become the kind of Jews that their great-grandfather, Mattahias, had once killed as traitors.”

I bring this up now because for better or worse, we are living in troubling times. It seems there are opposing forces at work not just in America but around the world: one for love, tolerance, diversity and inclusion and the other for hatred, bigotry, oppression and intolerance.

As we enter into uncertain times and battle against some pretty ominous forces, it is our duty more than ever to speak out against injustice and to actively engage the democratic process in whatever way or channel resonates with us. It is our moral and social responsibility to preserve the ideals upon which not only Judaism but our country was based so that we guarantee equality, freedom and justice for all.

This is our duty as Jews and as Americans. And in this way we will truly be a light unto the nations.

ABOUT THE AUTHOR
Cantor Steven Weiss, the Cantor and Director of Education at Congregation Sha’aray Shalom in Hingham, Massachusetts, is immediate past President of the American Conference of Cantors (ACC).

1 thought on “Cantor Weiss: Hanukkah as a Battlecry for Justice and Equality”