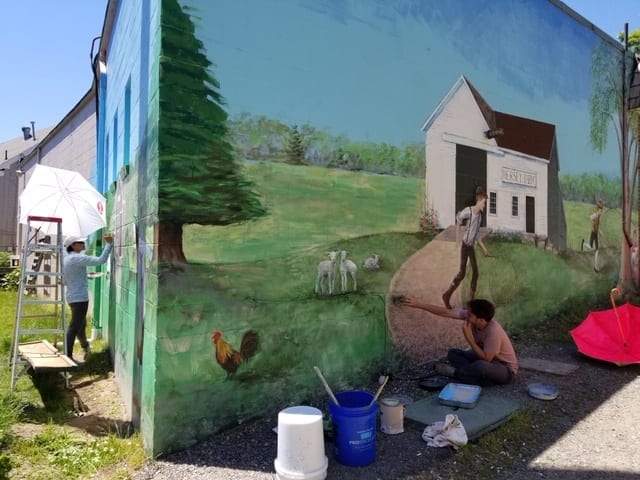 Visitors to Hingham Square Sunday who were enjoying the beautiful weather were pleased to see the progress that has been made on the colorful, historically-themed mural that's being painted on the back and side of the Hennessy News Building on North Street.

"Its nearly 90 percent complete," said well-known Hingham Artist Susan Kilmartin, who is working with Hingham High and South Shore Charter School students with guidance from their art teachers to create the mural, which she designed. "It should be finished by the end of June for sure."

The mural illustrates the Reuben Hersey Toy and Box Factory discovered a few years ago on Hersey Farm, "completely intact after 100 years of being hidden away by vines and overgrowth," Kilmartin said. "The muralproject was originally started by the energetic Shirley Rydell," who is also a Hingham resident.

The cost of the paint and other supplies the students have been using since the beginning of the project and now is covered by an earlier and a more recent Greenbush Historic Preservation Trust grants. The purpose of this fund is to preserve and maintain historic assets and streetscapes along the Greenbush commuter rail right-of way and the surrounding area to enhance downtown Hingham. (The back of Hennessy's News abuts the tunnel cap.)

"I'm very grateful they gave us this grant," said Kilmartin, who is donating her time to the project.