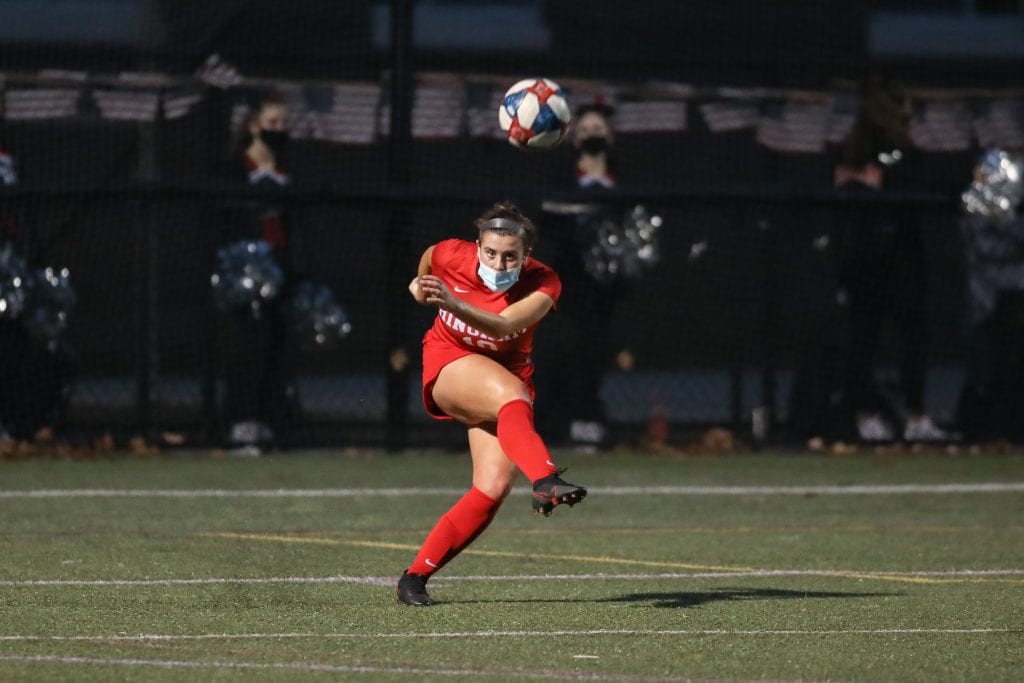 The girls soccer team faced a tough opponent last night in their first Patriot Cup playoff game at home against Pembroke.  The Harborwomen earned a number one seed in the Keenan division throughout the playoffs with their 9-1-1 record in the regular season.

Like most of their games this season, the girls started off a bit slow in the first quarter, which saw no score.  Then, to make things a little more challenging for Hingham, one of their star forwards, junior captain Ava Maguire, left the game in the second quarter with an ankle injury.  This seemed to be a rallying call for the Harborwomen as they picked up their game after one of their teammates went down.  In the 36th minute, junior Riley Cotter buried an impressive shot from 25 yards out to open the scoring.

"We try to take as many shots as we can during the game," Cotter says. "I got the ball really far back and I just shot it to the back and I didn't know if was going in, but it did.  Usually when we score, the flood gates open and we start scoring more, so that really helped the team."

One of the strengths of the Harborwomen is their ability to substitute players seamlessly without quality of play going down due to their very talented bench players.  When Maguire went out, freshman Ava Varholak stepped in and the team didn't miss a beat.  Halfway through the third quarter, Varholak scored off a corner kick to give Hingham a 2-0 lead.  For the final quarter an a half, the Harborwomen's defense, led by senior Katie Dalimonte, was outstanding in limiting the Lady Titans scoring chances.  Even when they managed to get a shot off, junior goaltender Kathryn Wilson made some terrific and timely saves, never allowing Pembroke to gain any momentum in the game.

"Pembroke is a very tough opponent," says Head Coach Sarah Dacey. "We played in spurts tonight and it wasn't our best game, but I'm really proud of the win.  We had two great goals by Riley Cotter and Ava Varholak, not our typical goal scorers, so it's really great to have them score for us."

Hingham's next opponent will be either Whitman-Hanson or Plymouth North.  They will play each other this weekend.  Hingham edged out WH for the top seed in the Keenan division when they beat them last week 2-0, however tied them back on 10/8 2-2.  Plymouth North is the only team to beat the Harborwomen this year 3-1 back on 10/21, but beat them 4-2 on 10/6.

"Every game is a tough opponent, everyone is really good at this point," Dacey adds. "There are no easy games, so we are just going to prepare to the best of our ability and see who we end up playing" 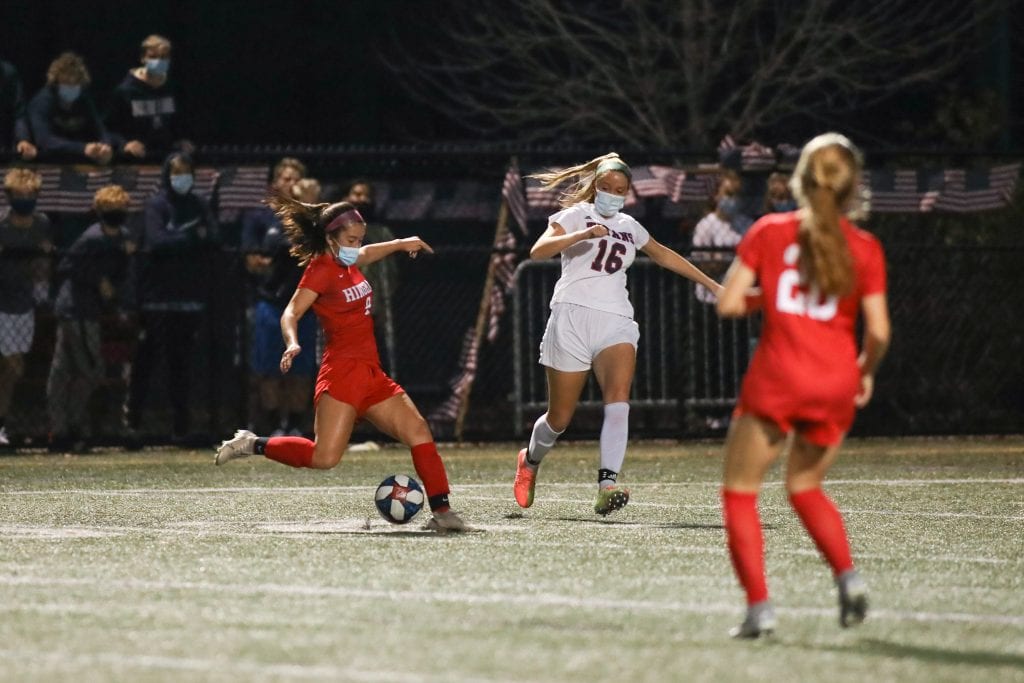 Junior Riley Cotter with a long range shot that give Hingham the 1-0 lead. 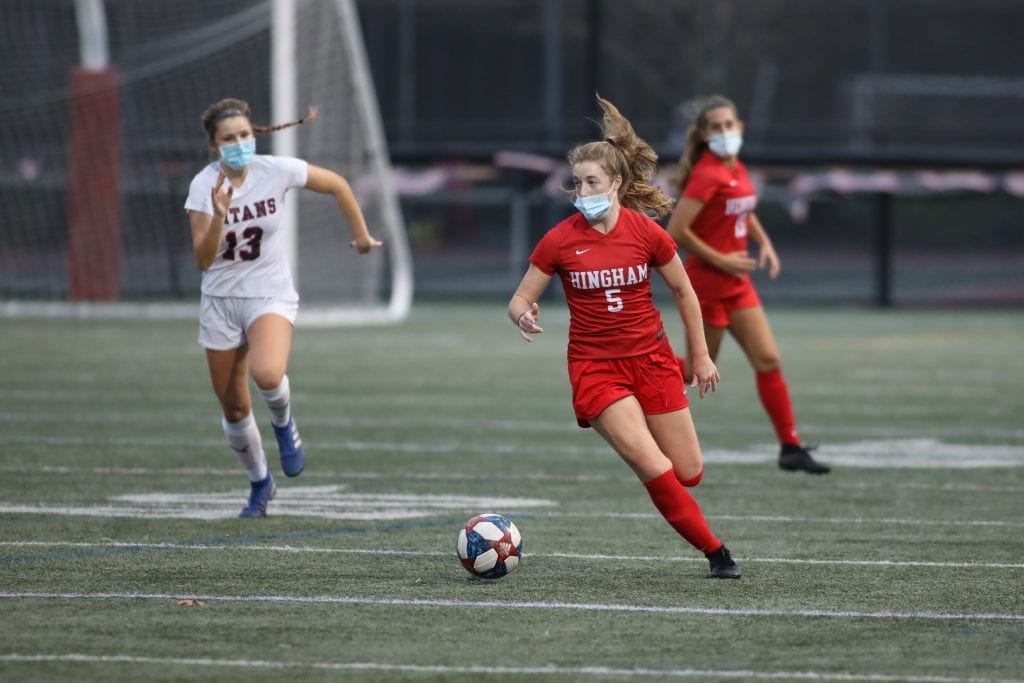 Junior captain Ava Maguire left the game in the second quarter with an ankle injury. 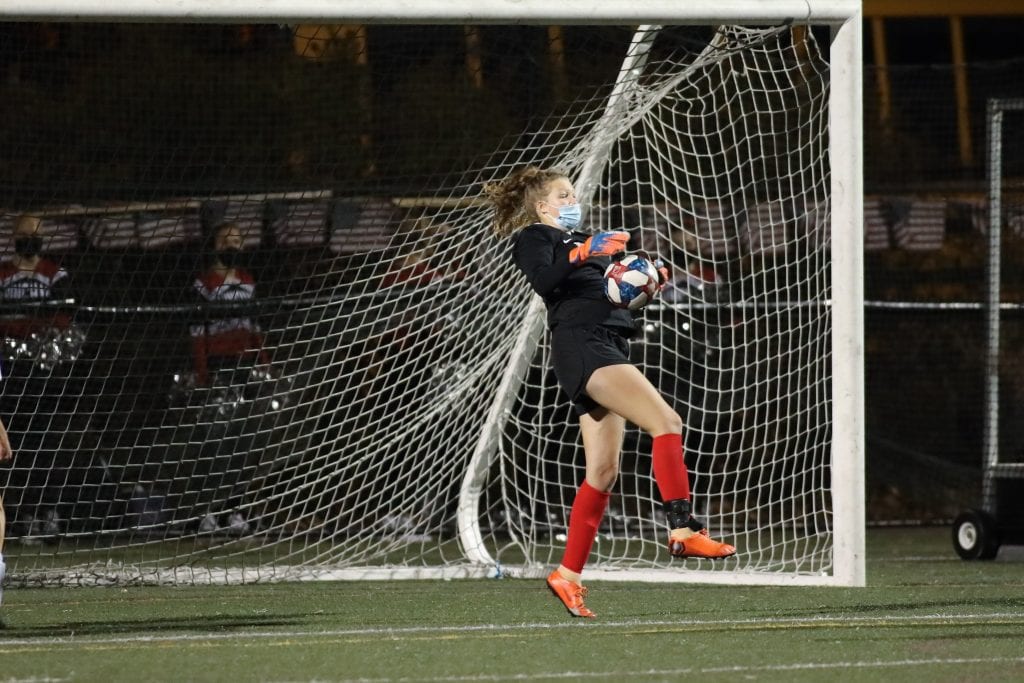 Junior Kathryn Wison with some great saves throughout the game, including this one late in the 4th quarter. 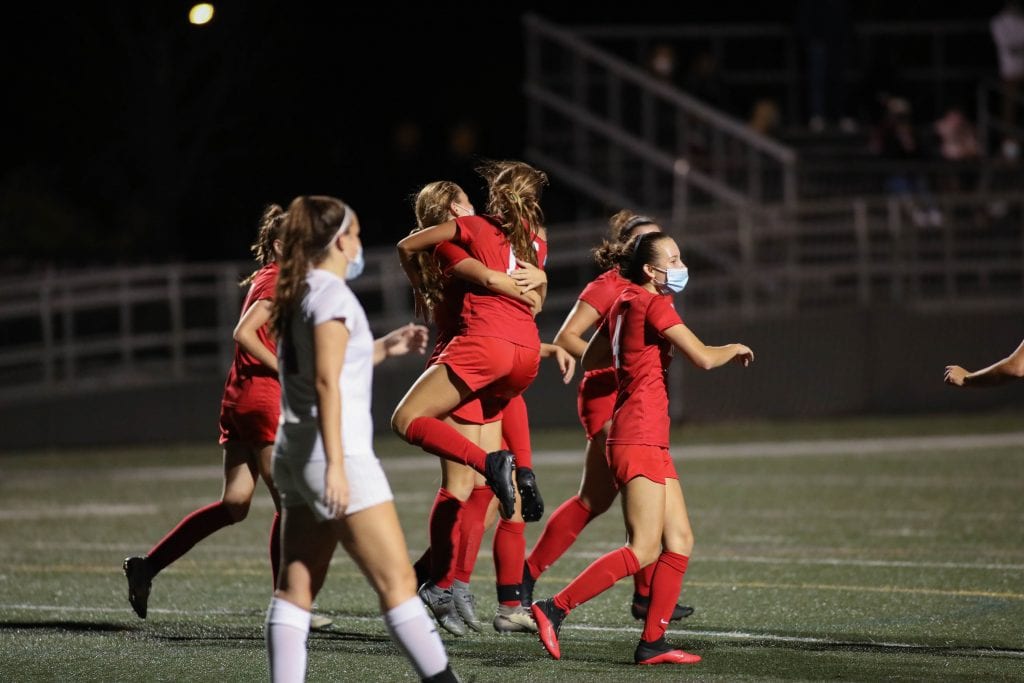 Junior captain Alexa Varholak jumps into her sister Ava's arms after her younger sibling scored in the the 3rd quarter. 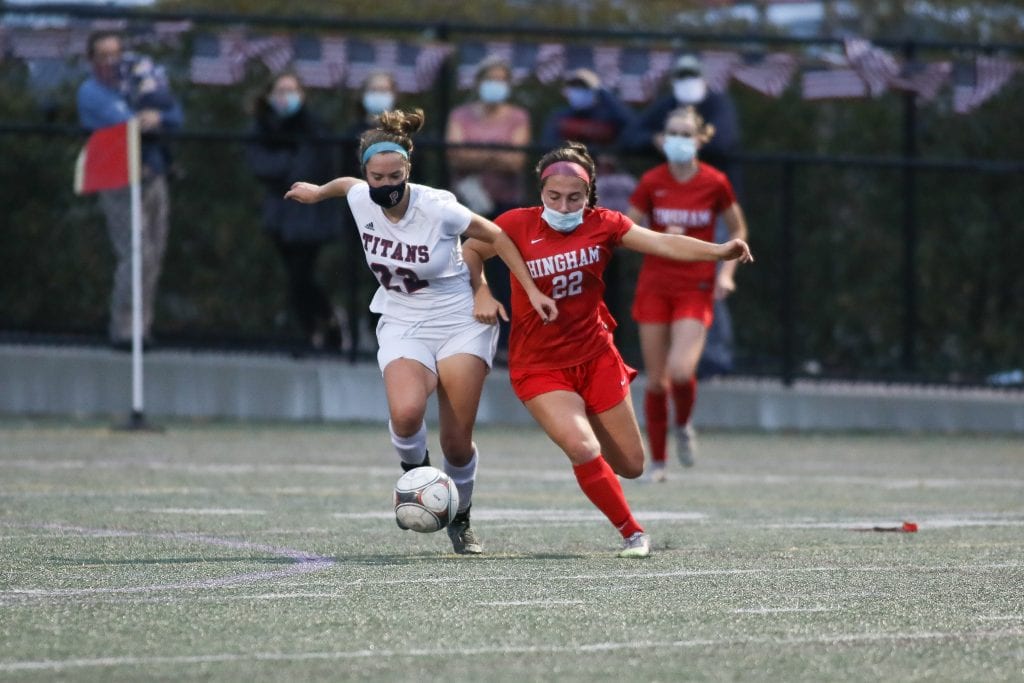 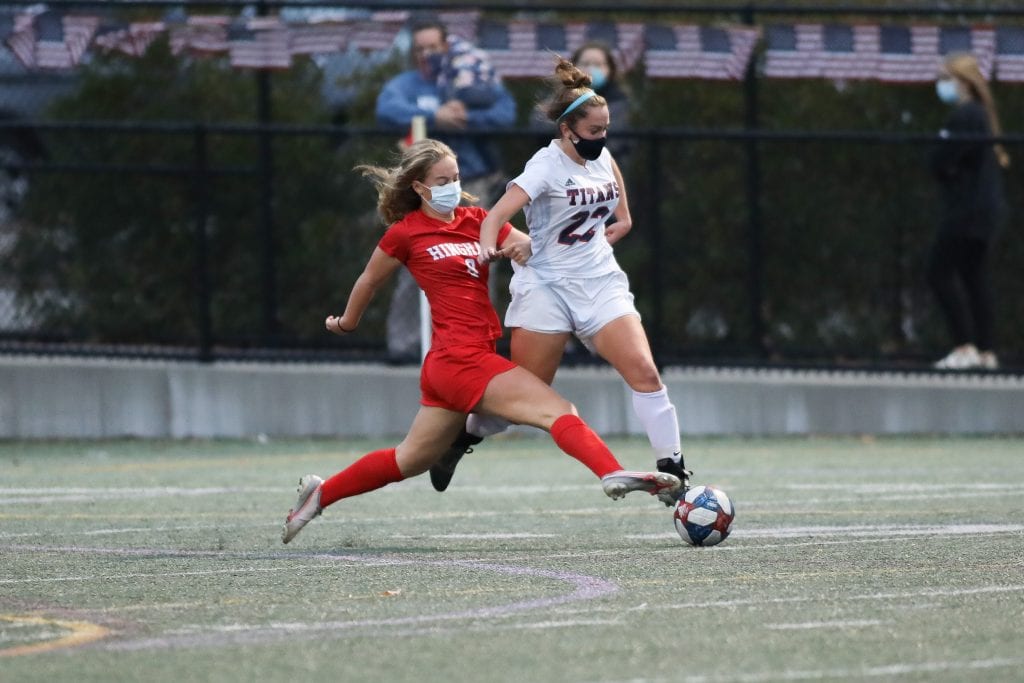 The Patriot League's top goal scorer sophomore Sophie Reale didn't score but did get an assist. 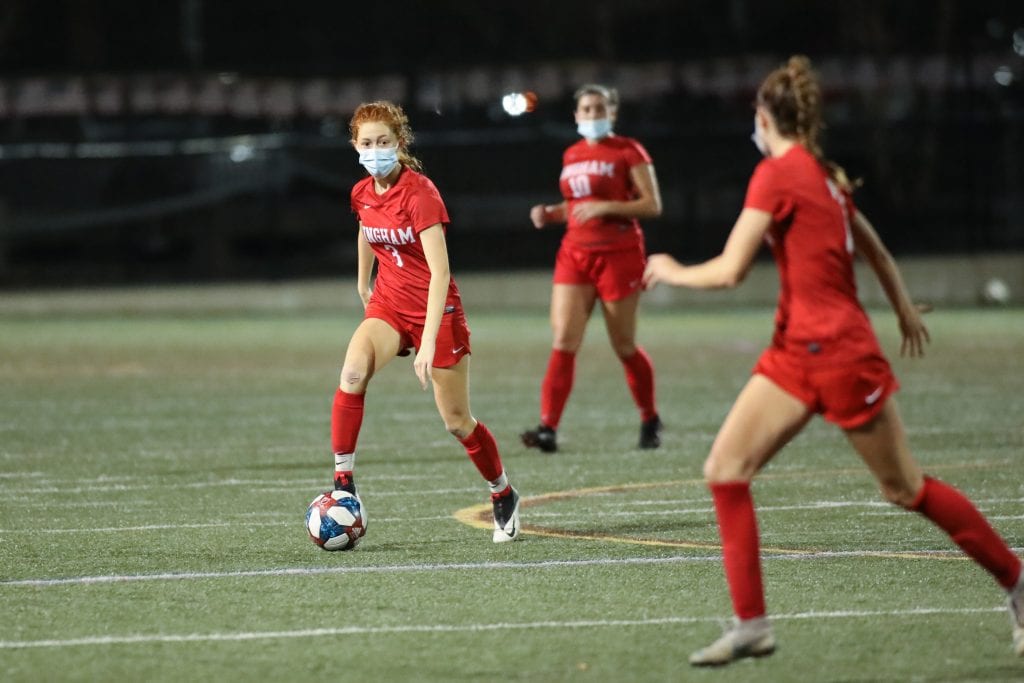 Junior Cara Chiapianelli is part of a stellar defense that kept Pembroke off the board.