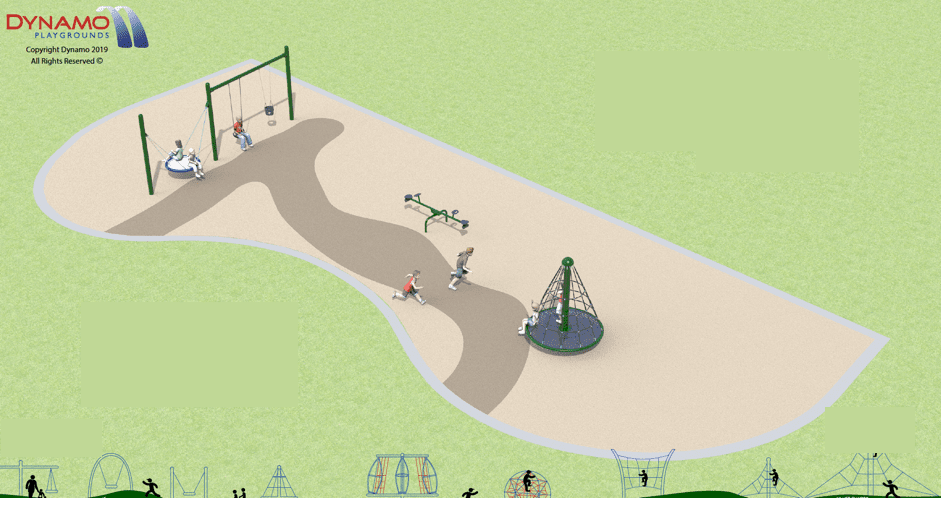 Neighbors have been working on a plan to address the aging play equipment adjacent to the softball field in Hingham Centre for more than two years.

Despite different points of view, they are working in a spirit of cooperation to come up with the best possible solution.

The most-recent, ADA (Americans with Disabilities Act)-compliant design includes a seesaw, swing set with two swings and an attached "saucer" for children with disabilities, and a scaled-back framed climber to replace the existing seesaw, swing set, and jungle gym. An earlier plan called for an additional, larger climber and no seesaw. The surface would be wood chips, with an earth-tone rubber walkway.

"Whether you have children or not, this is about the kids," said Michael Monteiro -- a member of the Hingham Centre Play Area Committee along with Katie Zandbergen and Mark Cullings -- at a recent neighborhood meeting. "By the time this becomes a reality [if the project moves forward], my kids -- who are eight and 10 now -- won't be interested."

The town closed the play area during the spring of 2017 "with no budget or plan to replace the aging and dilapidated equipment," Monteiro said. The playground, which is under the Selectmen's control, is still standing. 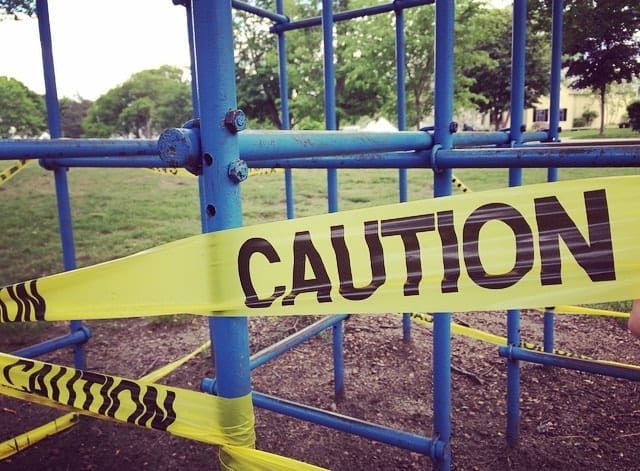 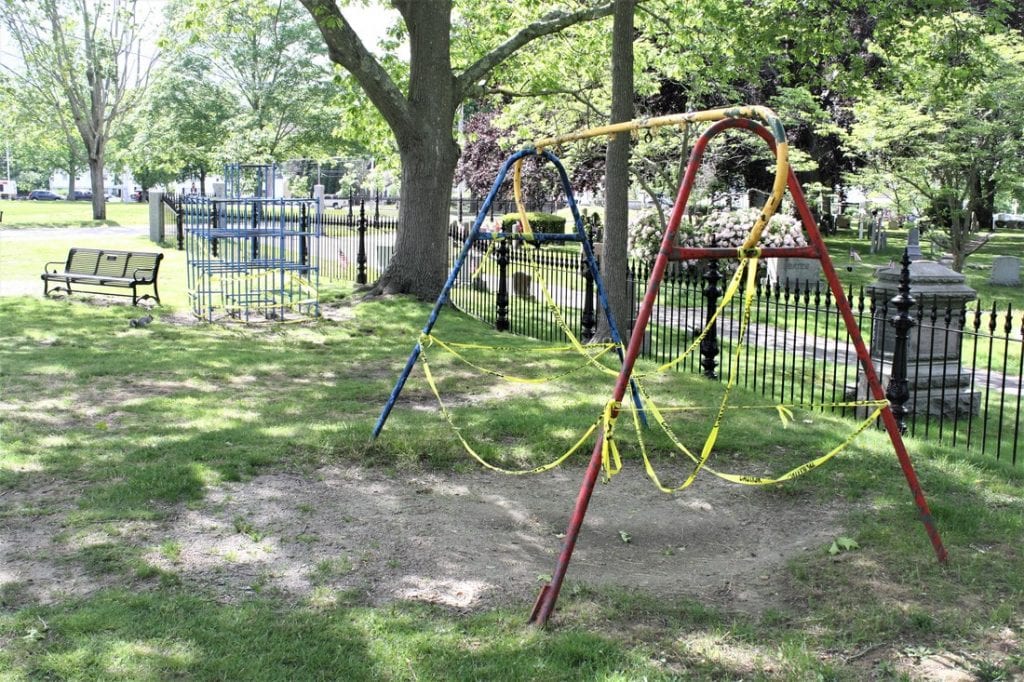 Following numerous delays since the Planning Board and Selectmen unanimously approved an earlier design for new play equipment in June 2018 -- including comments voiced by community members related in part to aesthetic concerns about the proposed framed climber -- a neighborhood meeting was held  Saturday (July 13) to consider the latest design plan and to talk about next steps. Residents from the surrounding neighborhoods were invited as well as those living in the immediate area.

The goal is to meet again with the Selectmen as soon as possible to seek their approval of the current design proposal. In the meantime, Monteiro said he continues to work with the town administrator. It's unclear whether or not any other approvals would be needed if the selectmen give a green light to the design. The project timeframe has not yet been determined.

When asked by a neighbor what's the alternative if the current proposal is not approved, Cullings responded, "That's unclear."

Those involved with the project want "as much transparency as possible," Monteiro said. "We know many people within the community have fond memories of their children growing up and playing on the existing equipment, but it doesn't meet today's safety standards and has sharp edges. It is beyond its useful life."

In addition, Monteiro said, the current play area is not accessible to children with disabilities and the equipment is "dangerously close" to the wrought-iron fence surrounding the cemetery.

While Cullings initially proposed improving the playground, he said he does not at this time support renovating the existing play area, known as Centre Field Playground.  "When I started this project over two years ago, I and others thought it would be a simple matter of replacing the old equipment with newer pieces that met contemporary safety standards," he said. "We were enthusiastic, but we were wrong."

Because Cullings was uncomfortable with the direction the proposal was taking, Monteiro stepped into the leadershop role.  "He, I, and Katie worked hard at developing the revised and scaled-down proposal we're discussing today. While I supported the process, I grew increasingly concerned with its size, scale, aesthetic, and appropriateness components," Cullings said.

He also has concerns about such a playground attracting more users and noted that a "large and popular playground is just a couple of blocks away" behind Central Fire Station. Cullings further noted that the play area is adjacent to two historic districts and should fit in with the existing streetscape.  "I feel this is like trying to fit a square peg into a round hole. This is not what we set out to do," he said.

Leavitt Street resident Susan Kiernan called the Hingham Centre play area "a true neighborhood playground -- different from the one behind the firehouse and the new one on Hull Street. I think it would continue to be used by neighbors rather than by residents from other parts of town [if the current design is approved]," she said.

Mary Beth and Jason Hamilton of Riverview Road were unable to attend the meeting but expressed their feelings in a letter to Monteiro: "This playground has served as a neighborhood meeting place, bringing together families and kids from Riverview/Studley, School Street, and Middle Street. It is a constant after-dinner walk destination for before-bed fun. . . . We ask that our neighbors understand the importance of having a neighborhood meeting spot for children and families — it builds community, encourages outside play, and provides a backdrop for years of memories."

Jennifer Davis and Michael Pollard of School Street, who were unable to attend the meeting, also wrote a letter of support: "We love seeing kids riding and walking up and down the sidewalks, playing pickup games of ball on the ball field, and taking advantage of the friendly and safe area in which we live.  Replacing unsafe playground equipment with compliant equipment will serve to enhance the neighborhood not only for those families with younger children, but also for neighbors with older children and grandchildren. Any place that promotes fun, healthy outdoor activity for children also promotes healthy neighborhood relationships."

Some residents have reservations

Suky Berry and Signe McCullough, who are both involved with the Hingham Centre Cemetery Association and live in the area of the playground or not too far away, expressed reservations about the proposal. "I appreciate all the work, enthusiasm, and positive thoughts and feelings, but whatever is done there will alter the area -- which is a classic, beautiful space to sit and walk -- and would attract more people," Berry said.

McCullough echoed Cullings’ and Berry’s concerns. "I think lots of people will want to come from all over town, and they'll park all over the grass," she said. "This little triangle is it for Hingham Centre green space — for reflection, peace, walking your dog, and playing in the grass. It's an historic landscape."

Monteiro also shared his thoughts about parking.  "The current play area attracts mostly pedestrian traffic due to the limited parking, and there would only be three pieces of play equipment," he said.

McCullough encouraged those planning the play area to "think outside the box. Maybe it could be grandfathered in," she said.

The estimated cost for the proposed design is between $70,000 and $80,000. "We have commitments of about $60,000 so far," Monteiro said. "However, our fundraising efforts are on pause until we gain town approval for the latest plan."

The overall goal, he said, is to restore the play area for future generations by:

*being accessible to children of all abilities;

* keeping to three pieces of equipment that are of a similar size and scale to the existing swing set, seesaw, and jungle gym;

* using colors that blend with the adjacent cemetery and natural surroundings; and

choosing durable, high-quality equipment that will last for a long time.

"We came up with this design by gathering input from an online community survey and by working closely with town officials, playground equipment manufacturers, local installers, and Hingham landscape Architect Sean Papich," Monteiro said.

Regardless of the outcome, he said, "That equipment won't stand forever. It will eventually be replaced or removed."