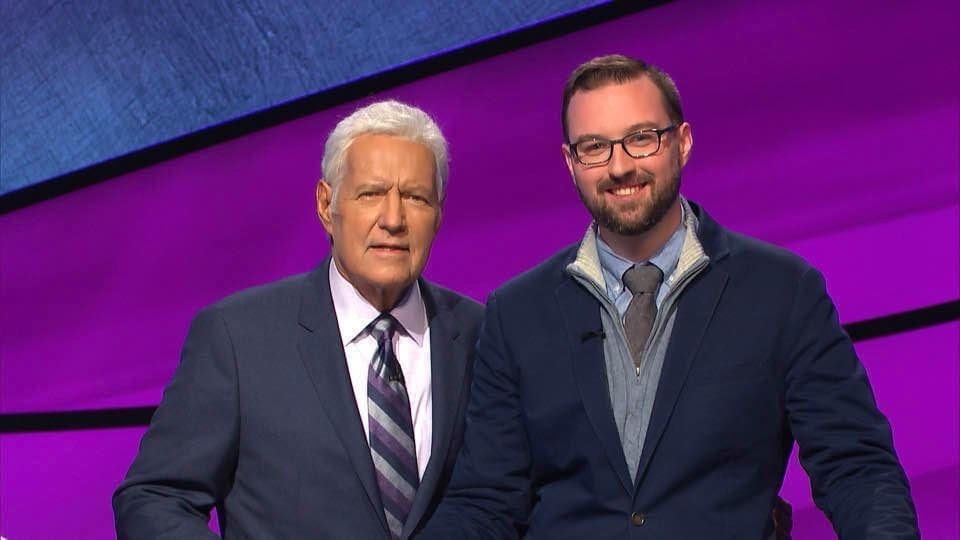 Hingham residents Eileen McIntyre and Roy Harris have something to look forward to tomorrow night – Eileen’s son, Jesse Laymon of New York City, will appear as a contestant on “Jeopardy!”

The Anchor caught up with Eileen and Jesse to learn a bit more about what inspired Jesse to pursue his dream of appearing on the classic game show.

Jesse shared, “I’ve been watching Jeopardy! for as long as I can remember; Alex Trebek has been the host for as long as I’ve been alive. And, like many people I’ve always had the thought in the back of my head – could I be a contestant?”

Jesse’s mom Eileen confirms, “While Jesse was growing up in New York City, we enjoyed watching Jeopardy! as a family and sometimes, just for fun, as soon as we knew the Final Jeopardy! category, we’d use the commercial break to try to figure out the correct response before the clue was given.”

After growing up watching the show and being a lifelong fan, Jesse decided to complete the online “Jeopardy!” test, which is the first step in becoming a contestant, which previously you could take once per year. 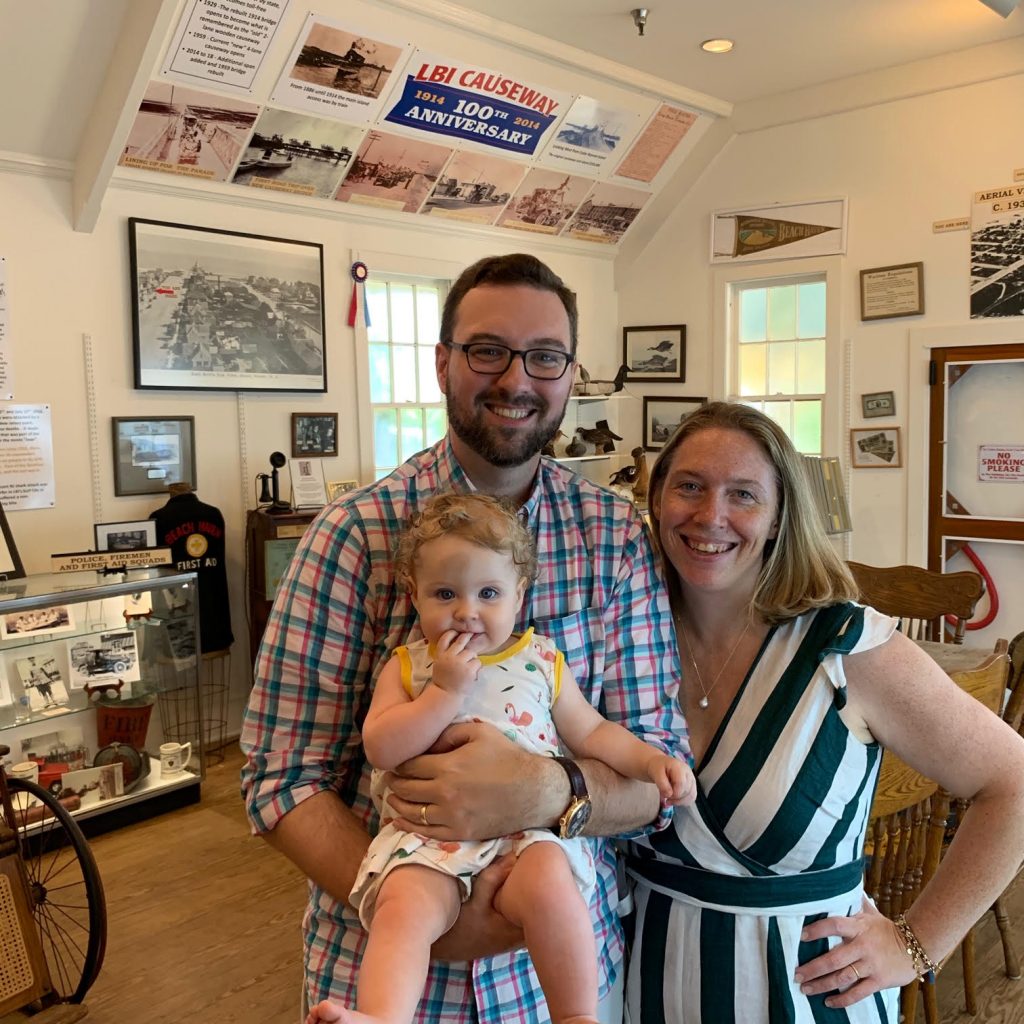 Pictured above: Jesse Laymon with his wife, Vicki, and their daughter, Rosie.

Regarding the application process for the quiz show, Jesse shared, “I’d taken the online Jeopardy! test a few times over the last four years, but last year after completing the online test, I was asked to come in for a tryout in NYC, where my wife, Vicki, and I live with our now-16-month-old daughter, Rosie. Once that happened, I knew there was a chance (but no guarantee) that I might get a call within 18 months to be on the show.”

After the tryout, Jesse was smart to begin preparing for the potential of being invited to be a contestant.

“I felt good about my interview, so when I had time (challenging in a 2-career household with a then one-year-old), I would follow some of the suggestions available online for Jeopardy! prep. For example, there are content areas that appear somewhat regularly on the board. So, if you are less knowledgeable about a topic like opera, you might want to learn what the most popular operas are and who composed them,” shared Jesse. “And for categories in which you have deep knowledge, you may want to refresh your knowledge, so it is more top-of-mind, giving you a greater chance to ‘run a category.’ There is also advice online about how to practice as you watch Jeopardy!—which helps you prepare for the rapid-fire experience.” 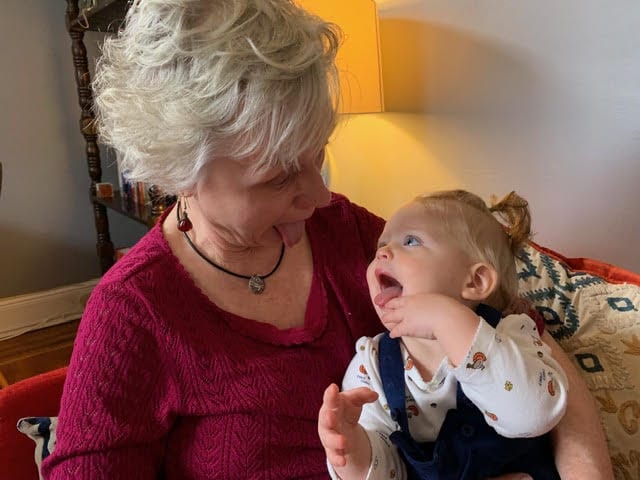 Pictured above: Hingham resident, Eileen McIntyre, with her granddaughter, Rosie.

In January, Jesse got the call that he’d been anxiously awaiting – he was invited to fly out to Los Angeles in February for a taping as a contestant on “Jeopardy!” As Jesse’s wife had a previously planned work trip that conflicted with the timing, Grandmother Eileen came to the rescue and jumped at the opportunity to watch her granddaughter in NYC so that Jesse could head to the West Coast to compete.

The week that Jesse taped was one of the last episodes to be filmed in front of a live audience before COVID-19 altered production.

When asked about the experience, Jesse shared, “The production team does a great job of making all contestants feel comfortable and confident throughout the experience—both while you wait in the ‘green room’ to go on and during breaks.”

And, of course, we had to ask what it was like to meet the legendary Jeopardy! host – Jesse confirms, “It was great to meet Alex Trebek, he has this dry wit that you see on television that he carries through in person. He is as bright and personable as he appears on TV, and interacts with both the contestants and the live audience a lot.”

Jesse also added, “My wife and I have such admiration and respect for Alex Trebek, especially over the last year watching him continue to host as he battles pancreatic cancer.” It is a cause close to their heart as they sadly lost Vicki’s mother to the disease just six months ago.

When asked how he performed, Jesse and Eileen kept tight lips and shared, “well, you’ll just have to tune in to see.” 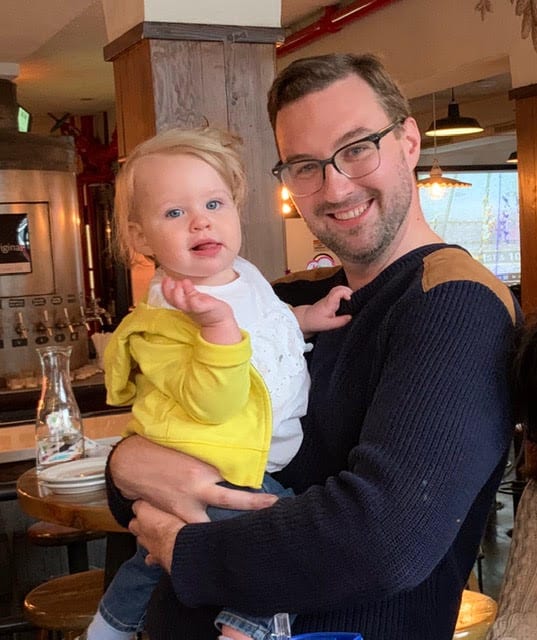 Pictured above: Jesse Laymon with his daughter, Rosie.

Jesse is especially excited that his daughter Rosie will get to watch her Daddy on national television, “Rosie is just starting to recognize me in pictures and say ‘Daddy’ so it will be fun to see if she makes the connection that it is me on TV tomorrow night.”

Think you have what it takes to be a contestant on the game show?

You can take the online test here: https://www.jeopardy.com/be-on-j/anytime-test.

Best of luck Jesse – we’ll be watching and cheering for you!