Facing the potential elimination of ferry services and major cuts to the Greenbush line, State Representative Joan Meschino (D-Hull) and State Senator Patrick O’Connor (R-Weymouth) are working closely with the towns of Hingham, Hull, and Cohasset to oppose eliminating ferry service and to oppose draconian cuts to the commuter rail.  Representative Meschino and Senator O’Connor encourage district residents to speak up and advocate for continued public transit services.  Already, there has been an outpouring of support for continued ferry and commuter rail service, in the wake of Monday’s Fiscal and Management Control Board (FMCB) meeting, during which MBTA leaders outlined likely service cuts to address the budget deficit, including eliminating the Hingham/Hull ferry.

A slide from the October 5th FMCB meeting showing the Hingham/Hull ferry as a likely candidate to be eliminated. Image credits: MBTA “Forging Ahead Updates: Scenario and Service Planning” presentation by Anna Gartsman, Kat Benesh, & Angel Donahue-Rodriguez on October 5th, 2020. 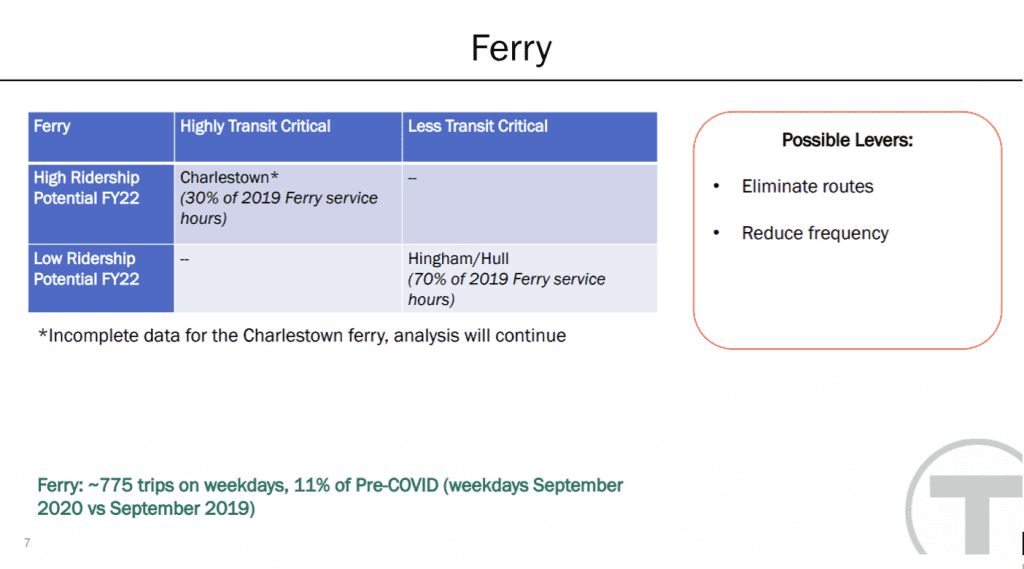 Over the course of October, the FMCB will gather input and feedback on service cuts and then release three alternative plans on November 2nd.  Following its presentation to FMCB, the MBTA will seek public comment for a 4-week period of time.  The FMCB is scheduled to make its decision on December 7th.

Using the dual axes of likelihood of ridership and degree to which a population is transit-critical, the MBTA designated both the Hingham/Hull ferry and the Greenbush line as services that could be cut.  Unfortunately, the MBTA’s analysis focuses too narrowly and needs to encompass a broader picture.

“This is not simply an issue of low ridership,” explained Representative Meschino.  “The Baker Administration depressed ridership when commuters were directed to work from home.  To cut services just as we reopen our economy will impede commuters on the South Shore from getting to their jobs, clog the area with traffic, and worsen pollution along the highway into Boston.”

“The proposal to severely cut services for the Hingham and Hull Ferry and Greenbush Line is counterproductive to everything we have invested in public transportation for the South Shore,” said Senator O’Connor. “Over the past two decades we have invested millions to make the South Shore accessible to commuters, modernize transportation, get cars off the street, and help reach our environmental goals. It is imperative that we strive to retain these services as we weather the COVID-19 pandemic and associated budget restrictions, so that the South Shore and surrounding areas do not suffer long-term losses to our community, our economy, and our future.”

Residents interested in getting involved can find information on Representative Meschino’s website at www.joanmeschino.com/save-our-transit.  On this page, individuals can sign up for important updates and receive advocacy instructions and guidance.  The page will include a number of resources, including links to the FMCB website where individuals can submit comments before the FMCB’s October 19th, November 2nd, and December 7th meetings, as well as watch these meetings via livestream.  In addition, there will be a survey that residents can complete documenting their support for the ferry from which the Representative and the Senator will draw in drafting letters to the appropriate agencies.  Finally, there is a link to Senator O’Connor’s landing page at https://www.senatoroconnor.com/mbta_cuts.

“The Hingham / Hull ferry service and the Greenbush commuter rail line are a lifeline to the economic anchor for our region -- Boston,” said Representative Meschino. “We have already heard from residents about the challenges and cost of getting to work and sustaining local business. We urge anyone who relies on these services to speak up now.”